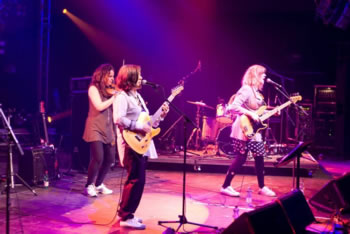 The Raincoats are as vital as ever, argues Lydia Harris, who left their recent gig determined to join a grrrl band

For just over three months, the National Portrait Gallery has been celebrating Gay Icons. This impressive exhibition features photographic portraits of people deemed iconic by some of the most famous and influential gay figures alive today. Alongside the main exhibition, the gallery has hosted a number of events designed to explore the meaning of the words ‘icon’ and ‘iconic’. On 25 of September, The Raincoats played as part of ‘Icon-i-coustic’, a series of concerts, held at the gallery, by iconic musicians and bands including Patrick Wolf and Beverley Knight.

Ana da Silva and Gina Birch formed The Raincoats in 1977, in the midst of the boy-dominated punk scene. By 1978, they were joined by Vicky Aspinall on violin and the legendary Palmolive, of The Slits, on drums. Their eponymous debut album, released in 1979, has rightly achieved iconic status. The Raincoats is the sound of women finding their own way of expressing themselves through music. Its off-kilter rhythms and feminist subject matter combined with Ana and Gina’s incredible vocals are like nothing else that came out of the macho punk scene. Their strictly DIY, lo-fi approach has been admired by other iconic musicians including Kim Gordon and Kurt Cobain, who wrote the liner notes for the 1994 re-release of their debut.

It’s easy to see why The Raincoats were chosen to perform at this event, then. But this was much more than a gig. All of the musicians in the ‘Icon-i-coustic’ series were invited to present their own icons before performing themselves.