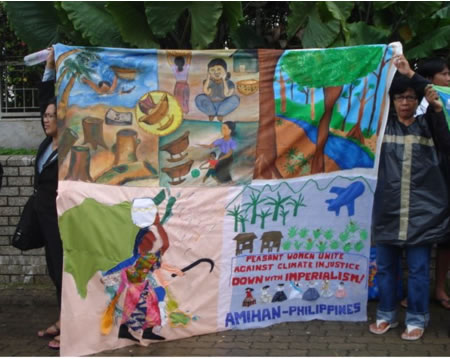 People’s Action on Climate Change have posted a gallery of fantastic photos from the Asian Women’s Quilt Parade that took place today at the UN climate talks in Bangkok.

More about the project from the press release:

Asian grassroots women are now calling for action on climate change and its impacts. The colorful images and symbols in the quilt aim to articulate the following points:

– Climate change and global warming will impact more gravely and harshly on the lives of the marginalized and poor sectors. Millions of poor Asian farmers, fisherfolk, indigenous peoples, especially women and children and all those who are directly dependent on our environment and natural resources for their livelihood are the most vulnerable to the impacts of extreme weather events, climate-related natural disasters, rising sea levels, rise of climate-sensitive diseases and the like. Women should be foremost supported in terms of capacity-building, technological support, climate change awareness and access to basic social services such as education and health.

– Deep and drastic cuts by the largest greenhouse gas emitters are needed now. Accountability to pay for past emissions and reduce future ones must be demanded from Annex I countries and especially the United States, the single largest country emitter of greenhouse gases. Their time of procrastination, profit-taking at the expense of the environment and the people, and evasion of global responsibilities to cut emissions is coming to an end. Action to ensure clean and clear cuts must be pursued now.

– The people’s needs, not corporate greed, should be the focus of the ongoing UN climate talks: We urge the UN negotiators and government delegations to heed the Asian grassroots calls for climate justice and people’s welfare above elite corporate interests in the ongoing climate negotiations. Focus should be redirected away from corporate greenwashing and false solutions and steered towards protecting the people’s needs and welfare, especially women’s human rights, reducing existing vulnerabilities from the local to the regional levels, and reviewing and repealing policies, frameworks and programs which contribute to the cumulative effect of reducing people’s and women’s capacity to adapt to climate change impacts.

The Asian Women’s Quilt on Climate Change project is a giant collaborative quilt on the calls of Asian grassroots women affected by climate change, aiming to visually present the stories and symbols of the people most affected by the serious impacts of climate change – the grassroots sectors in Asia.

The quilt hopes to contribute to the global efforts to craft strategies for the people’s engagement in the issue using traditional and new media: the handmade quilt is to be made globally accessible through a web-based gallery.

It is among the activities comprising the People’s Action on Climate Change (PACC), a week-long series of events by Asian grassroots organizations calling for accountability, climate justice and people’s needs over imperialist and corporate greed.