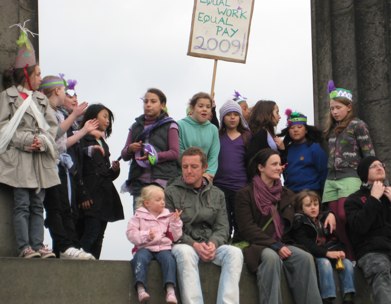 New feature: A gude cause maks a strong arm

Wisrutta Atthakor reports back from the Gude Cause march through Edinburgh, 100 years to the day since Scottish suffragettes took to the city’s streets

On Saturday 10 October, thousands of women, children and men took to the streets of Edinburgh to re-enact the women’s suffrage movement procession that took place along Princes Street a century ago to the day.

The original demonstration took place on Princes Street, Edinburgh’s main commercial thoroughfare, which looks onto Princes Street Gardens and Edinburgh Castle beyond. However, due to ongoing tram-works in the city’s centre, the 21st century recreation of the iconic historical movement was not able to retrace the original route, which was a real shame, but unfortunately an unavoidable one. Instead, the march, starting at Bruntsfield Links, wove through the Old Town past the City Chambers on the Royal Mile to terminate atop Calton Hill, where a rally of speeches, music and singing took place.