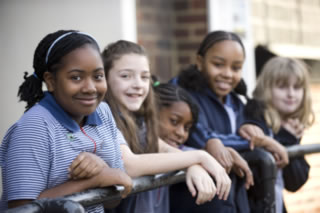 Girls in the lead

Starting Guiding at the rather late age of 20, I was admittedly being a hypocrite. All of the benefits I claim to get out of it now were far from my mind and I did not like the idea of a single-sex organisation. After all, that is why I was never a Guide growing up.

The truth is I was just looking for a way to fill my time. I was a student with the beginning stages of a horrible bout of depression. I was looking for any reason to leave the house. I answered an ad and by the time they contacted me I’d forgotten all about it.

I arrived at the meeting out of a sense of obligation and was led, looking confused, into the church hall. Two leaders were anxious for help and I was dispatched into the kitchen to help supervise some cupcake baking.

It was a mess. This group of girls (a patrol, I was told) had decided to bake cupcakes. Between them they had managed to bring all the ingredients to the meeting. One had the butter and another one had the sugar and flour. A mess was made and we all had a laugh cooking, talking and then cleaning up together.

Still, I was wondering why this was happening. It seemed to be badly planned, silly and bound to go wrong. Why where these girls allowed to organise themselves? Why where they working towards a chocolate Go For It? Whose idea was that?

It was all their idea, naturally. And later, when I had adjusted to working well with unpredictability, I saw why it was such a good idea. Doing the chocolate Go For It taught the girls two things. First they got to learn important facts about chocolate and then they got to learn about working together.

On the smallest level you can see girls gain confidence. But Girlguiding UK also takes part in nationwide research and international projects that benefit girls and women. Since 2007, Girlguiding UK has been conducting focus groups and polls to see how girls and young women feel.

The first of these given to me, ‘Under 10 and Under Pressure’, made a huge impact. In that report, girls under 10 linked all kinds of success with looking beautifully and dressing fashionably. Not only would they have more friends and better luck with boys, but attractive girls where also seen as being more intelligent. It was a bleak but truthful picture.

In an ideal world I’d be the first one to welcome boys through the door. This world is, of course, far from ideal

Rather than just preach about how bad it was for girls today we were given resources to help them. Alongside this research we Guiders (leaders) received a pack called ‘Looking at Me’. In it were lots of fantastic ways to get girls talking about how they view themselves and others. I used it as the focus of a sleepover.

A girls only space was the perfect place for us to discuss what was in the pack. Puberty was a big issue but it was approached in a fun, light way. We stuck cotton wool to a picture of a person talking about wanted and unwanted hair. One of the older girls talked about using hair removal cream and we winced at stories about waxing. Guiding gave them a safe place to discuss their bodies.

Although I could see the reason why girls enjoy and benefit from Guiding there were some uncomfortable elements for me. In the pit of my stomach I could not help shift the feeling that it was wrong. I’m against, more than anything, excluding people. Yet there we were excluding half of the population.

It is something I still think is wrong, but I was still a proud Guide. I wondered if the girls I knew would be able to develop in the same way with boys around. There are issues – periods, bras, waxing – that we would not be able to talk about. Of course with boys around our girls would have been forced to be, well, girls.

It is unfortunate that the girls would be seen as girls first and individuals second. What is worse is that they may feel the need to be girls first and individuals second. When I asked the girls if we should (on principle) let boys in the unit the girls who argued ‘yes’ wanted to flirt. Flirting is not the worst way to spend the afternoon but I do not think we would be able build skills and confidence the same way.

What really cemented it for me was talking to another leader. She told me about a Senior Section (ages 14-26) unit she used to run. They were thinking of joining forces with the local Adventure Scouts but the girls were against it. They liked having this place to go to where they could ‘just be girls’.

Guiding gives a safe place for girls to explore almost anything they want without feeling under pressure to perform in traditional gender roles. In an ideal world I’d be the first one to welcome boys through the door. This world is, of course, far from ideal. One day we may get there, but today we need Guiding.

Photo of a group of Guides, used with permission from Girlguiding UK

Clare Burgess is currently living in Torquay. Chambermaid by day, crime fighting writer by night. She spends her spare time tending to plants and cooking with her other half