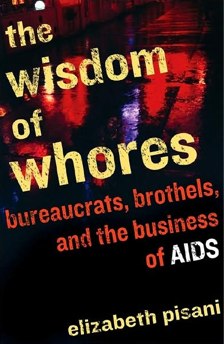 The Wisdom of Whores

Many of my problems with things in life stem from an emphasis on aesthetics while skimping on content. Concentration on the outside of the package has become so strong it often no longer resembles what’s wrapped inside. Elizabeth Pisani’s book, The Wisdom of Whores: Bureaucrats, Brothels and the Business of Aids comes dangerously close to this. The title is catchy, but I think the publishers may have reached a little too hard to find a kooky take on epidemiology in their search for a saleable title.

Elizabeth Pisani is an epidemiologist, a job she came to after what seems to be a bohemian life of writing and following a young man from free house to free house across the world.

She provides ample background and anecdotes alongside the theory and knowledge to describe the nuances of the HIV/Aids business in a loose and amiable style. Personally, I struggled with the relaxed tone and tell-all nature of the writing, though it has its purpose.

She does drop an apology of sorts for her language when referring to those she works with, but if she knows it can be offensive why use it just because she’s comfortable with it?

Epidemiology can be boring, Aids can be hard to talk about, getting people to care about sex workers and drug users particularly, as Pisani emphasises, and trying to get your head around the mind-numbing bureaucracy that blocks every bit of decent work in the HIV/Aids sector could be exhausting.

Pisani brings the stories of at-risk groups in a variety of countries to the forefront; sex workers, gay men and drug users are talked to and documented, given space to say what’s working and what isn’t, important ideas that are refracted through Pisani’s writing.

She also has a wealth of experience dealing with the buzzwords and roadblocks of bureaucracy, and details the failings and mishaps of that bureaucracy in a humorous and engaging way – though the aid system hasn’t been up and running for a very long time, there is enough detail to bore you to death – here Pisani’s relaxed manner is a saving grace.

However as much as I came away from the book with, there was much that irked me.

Pisani’s irreverent style, though easy on the mind, almost forced me to close the book when she ungendered trans women sex workers, and slipped annoyingly between colloquial turns of phrase to label her high risk groups and bureaucratic acronyms so I just wanted to read something else.

She does drop an apology of sorts for her language when referring to those she works with, but if she knows it can be offensive why use it just because she’s comfortable with it? Even more annoying to me was her assumption that being kidnapped and forced into prostitution was not trafficking – a crack in her understanding in my mind.

But this is the only way the book could have been made. The subject matter would be considered too dry if not thought of within the idea of ‘junkies’, ‘queers’ and ‘whores’, or without the passive cynical tones. Everyone is a bit sick of do-goodery and caring, so why not just pile in?

You don’t leave the book bubbling with rage for the inadequacies of Western aid systems, but you do leave with a more thorough understanding of how curing a disease rife throughout the world has become big business – you’ll have to decide where you go from there.