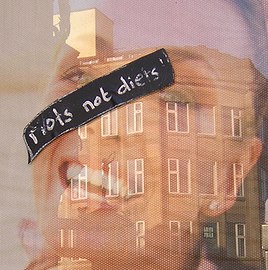 When I first read Susie Orbach’s Fat is a Feminist Issue, I felt like I was missing something. In her book, first published in 1978, Orbach argued that fatness and compulsive eating, and conversely thinness and other eating disorders, are linked to the way in which women (and sometimes men) see themselves perceived by society. Fat women avoid the attention of thinner women, do not need to feel the same pressure to find a husband (since, obviously, the fat bird never scores) and can shed the norms that their mothers had to stick to during the 1950s and ’60s. Thin women, however, can fear becoming fat because they fear being a failure, or preserve their thinness because it makes them seem more masculine and under less pressure to become a traditional mother figure.

All of this escaped me at the time. As a lesbian, I did not feel like I was under any pressure to find a husband in the first place, nor did I particularly care that the majority of men did not find my size attractive, although, clearly, at some point I must have noticed that they didn’t. I was, proportionately, not large, a distinctly average size 14/16. I didn’t feel that my extra padding gave me any protection in relationships, or in social situations, nor did I feel like I was being politically rebellious through the act of taking up space. I will confess to feeling slight stabs of jealousy for my slimmer counterparts, but not to great psychological detriment.

It rocked me to my core. I no longer recognised myself in the mirror

I passed the book to my mother, assuming that, perhaps, only those brought up or becoming adults in the late 1960s and early ’70s (or who were straight) would understand Orbach’s concepts. After all, what did I care if men looked at me or didn’t. Their attention didn’t make me feel uneasy and their ignorance didn’t make me feel deflated. I tried to apply its principles to the lesbian social scene and failed, perhaps because I do not spend a huge amount of time in large groups of gay women, and can not profess to speak for my ‘community’.

Until about two months ago, any male attention had more or less escaped me (save from the occasional old man who lacked subtlety in leering at my tits). It wasn’t that I didn’t think I was attractive to men, just that I didn’t notice either way. Consequently, my feminist values followed suit. My definition of feminism revolved around me, mostly, rather than as a reaction to male behaviour: feminism was being able to wear red lipstick and stilettos and still expect to be appreciated for my mind, not my aesthetic; it was refusing to read women’s magazines because of their overly derogatory messages, yet still letting myself revel in the photography of Vogue magazine. In other words, I guess I believed that I was free to make my own rules and my own choices.

Which is where I was when I first met Susie Orbach. I didn’t consider my life in any way defined, or even remotely affected, by the expectations of others. I didn’t feel like I had been encouraged from a young age to stick to the grow up, shut up, find a nice man kind of pattern. I had parents who were willing to let me find my own way to what I wanted to be, so the part of Fat is a Feminist Issue dealing with mothers and daughters didn’t seem to fit with me. I also didn’t see my body shape as something that either held me back or could propel me forward.

Then, I started to understand what Susie was on about. I broke a disc in my lower spine in a car crash and, to combat the pain, was given a cocktail of powerful painkillers. Overnight, my appetite vanished. I threw up, or wanted to, 90% of the time and food became a major inconvenience. Eight weeks later, I realised none of my clothes fitted and, on closer inspection, that I was now a size 10. None of this sounds particularly traumatic. After all, surely an easy way to drop a few dress sizes is every girl’s dream, right? (Ironic smile.) It rocked me to my core. I no longer recognised myself in the mirror. A shape that I had always prided myself on its inch-for-inch replication of Marilyn Monroe’s had become slight hips with a huge bust. And that was when I started to get it.

Losing weight changed me. I think, now, that part of the reason for its impact is that I didn’t set out to do it. I didn’t control my diet, or increase my exercise, or take the conscious decision to reshape my body. Consequently, I didn’t own the changes, I didn’t get the pleasure of measuring them that I would if losing weight had been something I had really been determined to do. I felt like I had been sidelined from all active decision in my body’s appearance. After all, I could do nothing to stem the sickness nor to rekindle my previous interest in food. When I stood in front of the mirror in the morning I felt like an airbrushed picture in a magazine, as if suddenly someone had sliced inches away from my thighs and stomach. It wasn’t just the fact that I hadn’t expected it, it was the fact that I hadn’t wanted it.

I would be pleased to accept compliments for my resilience in dealing with a debilitating condition, or my professional status, but not for, essentially, shrinking

It also completely changed me as a feminist. Part of my feminist experience, and, in fact, an important part, had been embracing my curves, taking pride in the perfect hour glass proportions of my body. I had set a lot of stock by refusing to apologise, to using my shape as part of my sexuality, as part of the way I presented myself. Now, I stopped feeling as feminine. I no longer looked at myself with the same pride, or walked with the same confidence. I felt as if I was fading into the background, as if I was becoming the norm in a way that I would never have done voluntarily. Now, I would say that no one body shape is ‘better’ or more attractive than another, nor that there was any real reason for me to feel the way I did but, in any case, that was my reaction.

This is a central part of Susie Orbach’s philosophy, that thinness can be seen as a way of fading away, of fitting in, of conforming to the pattern that someone else has defined for you. Fatness is a way of rebelling against that, and exercising the right to stand out from the crowd. Now, I see the logic in her arguments that I had failed to see before. I had never considered myself ‘fat’, but I was proudly curvy. Now, I have trouble to define my body to myself, to process it in a way that really allows me any ownership of it. I have still not quite managed to accept my own shape, to know its contours in the way I had before. To me, this has led me to redefine my own feminist principles. Now, I understand that my previous attitude, my all-embracing love of my own shape and the way I presented it to the world, was my central pillar of feminism. I owned my body. I loved my body. What everyone else thought about my body did not affect me one iota.

Now, I find myself uncomfortable with an increase in male attention. Nothing has changed other than my shape, which proves to me that it is only by playing by ‘the rules’ that I am worthy of attention (to some men, I should stress, not all). These are rules that I never really acknowledged the existence of, and which I have now been forced to confront. It makes me feel like a traitor to myself, like I have betrayed myself by losing my curvy-girl attitude. In the absence of my old shape, I find myself taking on new attitudes. I dress in a plainer, less attention grabbing way, trying to buy myself enough time to learn to accept my new shape before anyone else starts to pay it attention. I find myself angrier at men (and women) that look at me with approval, approval that I would be pleased to accept for my resilience in dealing with a debilitating condition, or my professional status, but not for, essentially, shrinking.

A society where women are applauded for their ability to become smaller, I have realised, is something that poses more danger than I would have imagined. It is thinness, not health, trimness, not intelligence, that is still portrayed as the true measure of success. Finally, people see me as worthy of their attention, of their approval. And I despise it. I shout my politics even louder than before, as if I somehow have to up my game now that I am seen as having defected to the other side. One thing that is abundantly clear to me: fat is, and probably always will be, a feminist issue.

Photo of graffiti reading “riots not diets” by Phoenix Dark-Knight, shared on Flickr under a Creative Commons licence

Helen Dring lives in Liverpool with a dog who likes to eat books. She likes strong women, riot girls and Marilyn Monroe. She dislikes being told high heels are anti-feminist and people who think ‘you look so straight’ is a compliment