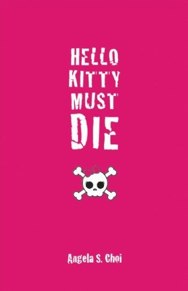 “I hate her for not having a mouth or fangs like a proper kitty. She can’t eat, bite off a nipple or finger, give head… She can’t even scratch your eyes out. Just clawless, fangless, voiceless, with that placid blank expression topped by a pink ribbon.”

The cutesy, mute Asian cartoon character Hello Kitty, beloved so many, is the surprising villain at the heart of Angela S. Choi’s darkly comic debut novel. She tells the tale of Fiona Yu, a Chinese-American lawyer whose parents are desperate to see her married – or at least wearing lipstick – and Sean, her childhood-best-friend-turned-plastic-surgeon with a grisly hobby.

Whilst all Fiona’s parents want is for their daughter to get married, all Fiona wants is to be left alone. Oh, and her hymen back. The novel begins when Choi’s heroine, determined to lose what she terms as her “family’s honour”, takes her own virginity only to discover that, by a biological quirk, she never had a cherry to lose in the first place.

Disgusted that she has been “protecting, preserving and defending an honour that had never even existed”, Fiona books herself in for a hymenoplasty in order that she can have something to destroy, “some family honour that I could shred into bloody pieces and wear around my neck.”

This lands her in the office of Sean Killroy, whom she last encountered being hauled off to juvie after setting a fellow student’s hair on fire. From then on, it’s Thelma and Louise meets Natural Born Killers. Whilst both trying to avoid the men her father tries to set her up with and navigate the murky waters of San Francisco’s legal world, Fiona joins Sean for a series of platonic dates that always seem to take place the night before a murder victim is discovered.

When the overbearing offspring of a wealthy chef decides that, despite Fiona’s obvious contempt for him, she would make the perfect wife, we see how little control this independent woman who prides herself on being “able to pay for my Jimmy Choos myself…[and] tell anyone who tried to put a damn bow behind my ear to go to hell” really has over her own fate – “the six-figure salary, the JD, the Eileen-Fisher-Armani-Calvin Klein wardrobe didn’t liberate me from the confines of tradition, culture and family.” And that’s when things really beging to spiral out of control.

Herself a frustrated ex-lawyer from San Francisco (although presumably minus the body count), Choi excels at charting Fiona’s progress from a disillusioned young woman frustrated with the assumptions society makes about her – namely that she is the human embodiment of a certain speechless feline – into a woman set on claiming her own anger and taking her revenge on the world.

Her prose quivers with anger, and the entire novel is a manifesto for every woman who has been belittled or demeaned. It may not be an advisable template for a rebellion, but it is a fast-paced, wisecracking gem of a book that leaves the reader ready to take on the world, and eager for a talented young writer’s second novel.