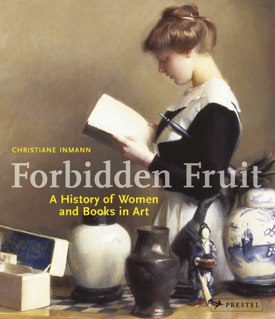 As all forbidden fruit should be, Christiane Inmann’s cross-cultural history of women’s role as readers and writers is mouthwateringly tempting from the moment you open the cover. Its pages are thick and satisfying, its golden text shimmers seductively and James Tissot’s autumn portrait of Kathleen Newton stealing into amber-drenched forests invites you to investigate further.

Forbidden Fruit: A History of Women & Books in Art does exactly what it says on the tin. Social and cultural historian Inmann claims to have produced the first account to trace the history of women’s literacy through various works of art and the development of writing by and for women. Presented in chronological order, beginning with the ancient civilisations of Mesopotamia, Greece and China, the reader is led through the ages, and across the globe, exploring the female struggle to obtain the power of the written word for themselves, opening the window to their education and increasing their freedom.

It sounded implausible that one volume could satisfy such a vast topic and maintain my interest. I suspect that all too many of us are familiar with those ‘critically acclaimed’ works that entice with dazzling packaging but are either too light on content, or over-stuffed with academia. Forbidden Fruit provides a pleasing balance; it’s comfortable, informative, easy to become acquainted with and beautifully presented.

Particularly fascinating is Inmann’s revelation that women were pioneers of world literature. It was Sumerian princess Enheduanna who approximately 4,300 years ago became the world’s first recorded author. In Ancient Greece, noble women including Sappho were both literate and educated in the arts. Murasaki Shikibu from Japan penned what’s often claimed as the world’s first novel. Ban Zhao was the first female Chinese historian with her Book of Han (Han Shu). As history progressed, women’s writing survived in pockets around the globe, flexing against the imposed constraints of male-dominated or class-structured cultures where the acquisition of books and the ability to read represented wealth and fortune.

The average woman had no access to education, no money to purchase books and no time to read them

More fascinating still are the historical illustrations and prints. Inmann tells us that these pictorials not only allow us to glimpse the way in which the subject perceived her own identity in relation to her chosen book or past time, but the artist’s appreciation of this identity. Gustav Klimt’s portrait of Sonja Knips with a red pocket book gently resting on billowing skirts; William Paxton’s painting of a housemaid, her chores forgotten as she leafs through a heavy volume left out by her employer; Renoir’s depiction of two young sisters with arms wrapped about each other’s shoulders and half-smiles tugging at the corners of the their mouths as they pour over the pages of an open book; a wall fresco of Greek poet Sappho, one hand wrapped about a tablet, the other gently resting a stylus against her lips in pensive consideration; John Opie’s careful presentation of Mary Wollstonecraft leaning over an open manuscript at her desk as if interrupted in thought; an engraving by Scipio Moorhead of Phillis Wheatley, her hand thoughtfully raised towards her cheek as she pens the cover page of her book Poems.

Be it a self-portrait, or presentation by another artist, the book each woman is captured to be reading – or writing – gives us a snapshot of her historical status, her socio-economic background, even her character and the perceived effects of her literary involvement on that character.

It is interesting to note, that in a cross-cultural phenomenon, from the ladies at court in Japan, to the women of the Chinese Han Dynasty and the young slave Phillis Wheatley in colonial America, poetry was considered an acceptable form of literature for women to both read and write.

Inmann does not much alight on the impact of the printing press when it was first introduction to Europe in the 1440s, except to say that it benefitted those women under the guardianship the Christian church, mainly those in convents, and was used to educate the female elite on the domestic arts. But in the 1640s, an improved printing press allowed literature to spread across Europe like wildfire. In the true spirit of entrepreneurship, it did not take long for distributors to accommodate demand for books aimed at women, and the Church led the fray with a fresh supply of religious and “morally uplifting” literature.

However, the material permitted to a female readership still fell far short of satisfying their hunger for substantial and intellectual stimulation, and any developments made still only benefited those of elevated standing and wealth.

The average woman had no access to education, no money to purchase books and no time to read them. In fact, the parallel between poverty and female literacy is one continually highlighted by Inmann, who points out that “…this democratic right has still not been won for the many women throughout the world whom poverty and oppression force to remain in intellectual darkness”.

Industrialisation heralded the rise of the middle classes in the West. Wealth improved funds for education especially in countries where widespread literacy was synonymous with the democratic process. By 1900, women’s colleges were springing up on both sides of the Atlantic, and a more liberal attitude to women and reading followed. “What had been an exclusively aristocratic privilege became an increasingly democratic activity,” says Inmann.

Inmann’s prose is so enticing that you feel slightly cheated out of a greater depth of enlightenment, and come away with far more questions than could possibly be answered in one volume alone

The price for opening the floodgates was often steeply paid by women who throughout history paved the way for their female counterparts; undeterred by the disadvantages of their societal placement, they risked being outcast, stripped of their fortunes (if they had any to begin with), lambasted and humiliated, even imprisoned. But, it is the encouragement given by women for women throughout history that is so touching, a unifying bond that Inmann has been sure to capture not only in her own words, but in those of her heroines. “The neglected education of my fellow creatures is the grand source of the misery I deplore,”‘ Inmann quotes from Mary Wollstonecraft’s Vindication of the Rights of Women.

The book is delivered in a palatable format; its chapters are laid carefully across double-page spreads, with artwork spilling towards a brief narrative tucked neatly beneath headings such as, ‘Les Femmes Libres’, ‘The Greek Poetess’ and ‘The Secret Notebook’. Interspersed at separate points throughout the book are four essays, giving body and context to the briefer chapters; Inmann really spreads her wings here, providing insight on the female pioneers of literature and reading, including Lady Margaret Beaufort (Mother to Henry VII), Sofonisba Anguissola who was encouraged by Michelangelo, Jane Austen and former slave Phillis Wheatley. Her presentation of each character is touching, perhaps even written with a hint of fondness and admiration.

Certainly, Inmann is not writing for those already well-informed on the subject of art or the history of female literacy, but rather provides a firm foundation on which to amass further knowledge; if you have alighted on these subjects before then this may not be the book for you. Inmann simply delivers as opposed to analyzing the content of her investigation. Unfortunately, this is also the disadvantage of the book. Inmann’s prose is so enticing that you feel slightly cheated out of a greater depth of enlightenment, and come away with far more questions than could possibly be answered in one volume alone. I suspect, however, that this enables Inmann to maintain the pace and lightness of her delivery that is so pleasing in the first place. If it is a good winter read that you’re searching for, then perhaps this Forbidden Fruit is a little too tempting not to bite into.

Jessica Gjergji is a freelance writer and arts publicist. She has a knack for killing houseplants, an intense dislike of tofu, and is utterly & happily dependent on tea and chocolate digestive biscuits