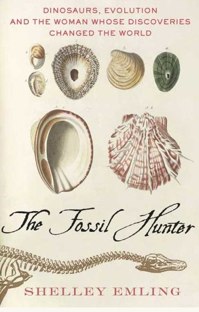 The Fossil Hunter, journalist Shelley Emling’s first book, is a fictionalised biography of Mary Anning, a woman whose fossil discoveries helped found paleontology and – although she didn’t know it at the time – would come to back up Charles Darwin’s evolutionary theory.

Charles Dickens was fascinated by her, modern scientists revere her, and it was Mary’s lengthy career that inspired the nursery rhyme “She sells sea-shells on the sea shore”, but it was not until recently that this oddly-dressed woman from Lyme Regis has been given her due.

The child of “adventure-seeking cabinet maker Richard Anning and his brooding bride, Molly”, Anning stumbled across the fossil of a strange monster with “flippers like a dolphin, a mouth like a crocodile, and a pointed snout like a swordfish.” This was the first Icthyosaur discovered, and the find supported the family for six months.