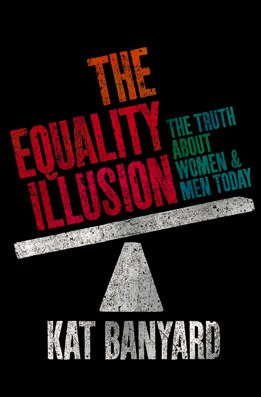 The Equality Illusion, subtitled The Truth About Women & Men Today, aims to blow away the myth that feminism’s work is over, and gender equality has been achieved.

As editor of a feminist website, I am perhaps not the ideal reviewer; I don’t need convincing. Nevertheless, in as much as I can judge, Kat Banyard makes good headway in shredding the misconception that we’re in a post-feminist utopia, backed up with references, studies and many interviews.

Her book is loosely structured to show how sexist oppression affects women from the moment the alarm goes off in the morning (beginning with body image issues) through to the end of the day with a chapter on ‘Bedroom Politics’, covering some of the ground of reproductive justice, such as abortion access and sex education. The book closes with a chapter on ‘Tomorrow’, outlining examples of what activists are doing to address the problems she highlights in the book, with guidance on how to get involved and Kat’s own policy ideas.

Banyard combines often heartbreaking interviews with girls and women with a battery of statistics and studies to demonstrate the issues that these individuals face are common and take place in a broader political context. This is by no means an easy book to read; one chapter piles on top of another creating a cumulative impression of just how bad the situation is. As I made my way through the book, the interviews and descriptions of various forms of violence against women became unrelenting. (This was exacerbated because, stylistically, The Equality Illusion sometimes reads more like a policy report than a book for a general readership.)

In contrast with a number of recent feminist books, Banyard includes many interviews with black and minority ethnic women and girls. This certainly is a welcome improvement, particularly in Banyard’s chapter on body image and beauty standards, as this is an issue all-too-often considered primarily in terms of how it affects white women (although at times she could have gone deeper into an intersectional analysis of this information).

Banyard uses statistics and studies, brought home through interviews with women and girls at the sharp end of inequality and violence against women

For my money, her chapter on education is the most successful. Banyard puts in context the received wisdom that boys are disadvantaged in the education system, in light of widespread evidence of sexual harassment and assault of girls at school. Fifteen-year-old Jena, we learn, is being sexually bullied by a boy named Alec. She tells Banyard Alec has been “grabbing her breasts in the school corridors. Sitting opposite me in class and making obscene gestures and threatening comments (‘I’m going to fuck you’; ‘Are you going to sit on my cock’). Jumping on me in the playground and rubbing against me.” The deputy head of the school told her “boys will be boys”; advice apparently dished out to many girls when they complain about offensive behaviour directed at them by boys within the school.

The interviews with Jena and a number of other girls in similar situation are backed up with a raft of discomforting statistics. To take just one example, according to the World Health Organization school is the most common setting for sexual harassment and coercion of girls.

The chapter proceeds to look at examples of how sexism operates in the classroom and beyond, from how gender roles are introduced when children are just babies, reinforced in primary school and then maintained throughout their school career. Banyard explores how a combination of gender stereotypes, policing of femininity and homophobia affects girls’ participation in sport from an early age.

Other chapters cast a similarly uncompromising and wide-ranging eye on the ‘sticky floor’ and ‘glass ceiling’ faced by women in the workplace, the horrific impact of rape and intimate partner violence on women, and the sex industry. Banyard’s formula: statistics and studies illustrating the problem, brought home through interviews with women and girls at the sharp end of inequality and violence against women, works well here. These latter chapters in particular are a very difficult read – perhaps this is only right, given the subject matter.

The final chapter ‘Tomorrow’ seeks to lift us up from this state of depression, sketching out Banyard’s ideas of how best to solve the problems she has outlined.

Banyard says: “For this chapter I have interviewed a small selection of people currently taking action against gender inequality, particularly those involved in grassroots activism, campaigning organisations and, vitally, men who are active in feminism today. What these individuals and groups demonstrate is that, by using or creating opportunities in our daily lives to challenge the equality illusion and further the ideal of a world without sexism, change is possible, and everyone has a crucial role to play.”

Unfortunately, it is also the weakest chapter. Banyard skirts all too swiftly over a few examples of grassroots activism. Although I hate to look a gift horse in the mouth as Kat mentioned The F-Word and quoted our founder Catherine Redfern, I can’t help but feel a bit dissatisfied with the scant few pages Banyard dedicated to grassroots feminism before moving on to cover at breakneck speed the voluntary women’s sector, campaigns to close the gap in protection against domestic violence left by the government’s ‘no recourse to public funding’ rules, professional-scale policy campaigns carried out by formal organisations such as the Fawcett Society, pro-feminist men’s activism, political representation of women in Rwanda and then making the case for Sweden’s prostitution law.

All good stuff, but she has tried to cram too much into too little space – which is probably why the otherwise thorough book reverts to a shorthand that certainly I could understand, but I’m not convinced her target readership is in the same position. Mentioning organisations like Eaves Housing for Women without an explanation of what they do or where in the world they do it, for example, or stating that someone’s feminist politics fits within a “social justice” context, but without explaining what that means, is only going to confuse. The book clearly needed an uplifting ending and positive message that change is possible. It becomes apparent why many other feminist books end each chapter with a list of further reading, suggestions for activism, and ways to channel the deep emotions and anger inevitably stirred up through any serious look at oppression.

The Equality Illusion is a big step up from Ellie Levinson’s much criticised attempt last year to introduce feminism to an as-yet-unconvinced audience. Banyard manages to cover a wide spectrum of feminist issues. She also does a good job of centring some issues that are still not talked about nearly enough in mainstream debate, such as sexual harassment of girls in their own schools, and how this is ignored and downplayed by teachers. She is careful to back up everything with supporting data, so the book would work well tucked in a convenient place to be pulled out at times you need to reference a statistic or study. Much like the Feminism 101 blog, it could be a useful shortcut for feminists; ‘don’t ask me, read this’.