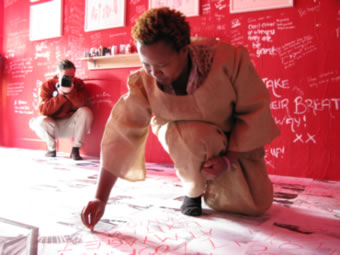 In conversation with Senzeni Marasela

Claudia Zeiske: Senzeni, we invited you to come to Scotland to address issues of women’s self-perception, which are high on the agenda at the moment. You initially came up with a proposal to work with a group of women here. Can you remind us of your ideas before you came here?

Senzeni Marasela: I have been doing work on my mother’s dresses for a very long time. I use her dresses as a canvas and tell the story of her life. My mother was a woman of her generation. She was never expected to work or have ambitions that went beyond the gate of her home. Essentially she never had a voice, in a way I speak for her and myself.

I wanted to work with Scottish women and look at creating narratives on dresses. I was interested in their silences. Many obviously were silent through the circumstances of their lives. They were far from the independent women we see on television. They were dependent on someone, often either a social worker or the social services. My culture also encourages dependency amongst women. We were going to take their stories and weave them into dresses. The idea was they could wear them and people could look at their lives.

CZ: … dependency amongst women. Do you mean a network of support and friendship?

SM: I mean the dependency on men and the idea that you only have worth once you are married to a reputable man. After that you are forced into silence. Also because we are so gendered that we are groomed for specific roles, we see very few strong and powerful women. Women are not authors of their own experiences.

I decided to create this shrine to Barbie where I would write to her and have conversations with her. I too want approval and yet I do not necessarily want to become a doll. I also wanted the set to be excessive and overbearing, that it would be too much and presented in abundance, so that people could understand this excessiveness

CZ: Are you talking about African women here or all women? The women that you met in this country were more dependent on the Social Services then on men.

SM: I am talking about both. Women in my society are encouraged to depend on men but many never do, and in Scotland, instead of encouragement to explore other avenues they are encouraged to remain silent, when one disappears behind an elaborate system such as Social Services, one is silent. Dependency and inability to help yourself is a form of silence.

CZ: The nature of your project changed while you were here, but you were still concerned to work with local women and to involve them in your performance and installation. Do you think that women here and where you are at the other end of the globe in the end have similar issues about their lives and their bodies?

SM: Women have insecurities about their bodies which lead to other things as well. But the circumstances of black women are very different because black women have suffered a double oppression, one from black males and the other from white males. This condition of being trapped between both worlds has resulted in the identity of black women shifting between these two worlds. Interestingly it has led to the formation of what I call the international look that combines all cultures.

CZ: Tell me more about the international look.

SM: I believe this look that was born out of being placed in the middle of a battle between the domination of the white world and the domination they have experienced in the black world. Since black women were trapped in this position for so long, they have sought an identity that will please both these masters. The international look is a combination of long fake hair, coloured contact lenses and tons of makeup. There are claims that it is a look that cuts across all cultures, but it has been specifically black women and other women of colour who have an urgent need to look international.

When I grew up black women in South Africa were encouraged to look big. A well fed girl would turn into a sought after bride. It showed that she came from a good family and the husband was expected to look after her very well. Now since the spread of women’s magazines and other mass media this body ideal has been transformed.

CZ: As you spent time here you became increasingly interested in the role of the international look and its embodiment in toys and dolls such as Mattel’s Barbie, why is that?

SM: There are many processes that European women have gone through over the years in pursuit of beauty. And now it has lead to the emaciated look and under eating. Now a beautiful black woman has to look like Barbie – a doll that has very little to do with the lives of black women.

There never has been a Barbie who has lived through a famine. This is not the traditional African ideal of beauty, this stick thin model. But we have become slaves of the silver screen. The more we see these thin models, the more we believe that this is the new normal. This is a new form of beauty. 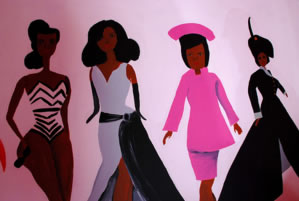 CZ: You have two children. Thato, your youngest daughter came with you to Scotland. How do you think that Thato, or her generation will adapt to these changes?

SM: Thato does not watch television, I have made this choice. I am trying to teach her lessons in life that it is important to be healthy and busy, not to try and look like everyone else. There are more important obstacles in life than the size of her thighs.

I grew up in a generation where the spread of media was new and accelerated. In her generation there will be really nothing new about girls that starve themselves. However women are also taking on different positions and roles in my society. Hopefully when she is a woman, there will be more women who are getting ahead than there are in my lifetime.

SM: I grew up with a very segregated art world, where there was such a thing as township art. This depicted certain scenes about black people in a stereotypical way. People are still trapped in that mindset even today. And when you make art differently, people are often taken back or shocked. Black women are more known for crafts.

Black female artists are still a novelty in the art world – especially those who have taken a decision to study art and travel abroad. It is difficult [for the art world] to imagine black woman artists outside the craft paradigm.

CZ: Finally you settled upon the project Jonga: Museum of Women, Dolls and Memories that related to the 50th anniversary of the Barbie, which took place while you were here in Huntly. Can you tell us a bit about this work?

SM: I had been looking at dolls for a very long time. I usually destroyed many of these dolls especially ones that were derivatives of white dolls. I had made and documented many performances with dolls: for example introducing the dolls to people, or taking dolls apart.

It happened that Barbie, who for years had captured the imagination of many young girls, was turning 50, and yet she has not aged a bit. When I was putting the ideas together, I remembered The Bluest Eye, a book by Toni Morrison. It is the story of a character called Pecola Breedlove; she was a very tragic girl. In the book she asks one unforgettable question: “How do you do that? Make someone love you?!” She of course never gets any answers as her little life spirals out control.

I wanted to understand the fascination with this thing called Barbie and exactly what she had done to deserve so much affection, much more than was afforded to real people. I wanted both to turn myself into an opposite of her and at the same time be equal to her in a way I decided to create this shrine to Barbie where I would write to her and have conversations with her. I too want approval and yet I do not necessarily want to become a doll. I also wanted the set to be excessive and overbearing, that it would be too much and presented in abundance, so that people could understand this excessiveness. 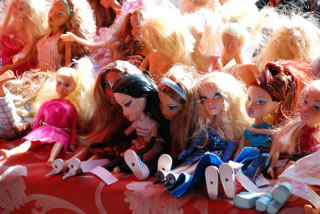 CZ: When you made a call for a Barbie amnesty, inviting people to give you Barbies and to allow you to display them what was interesting to me, was to find out the love-hate relationship people have with Barbie. Some people love her; others loathe her and some do both. What is your reaction when you see your own daughter Thato wanting to play with Barbie?

SM: I knew that she would be fascinated with dolls. Children find dolls very fascinating because they have a very active imagination. However I do hope that she will find dolls that look like her as resemble the story of her life and other girls that are like her. I think children should be given dolls that are closely linked to the lives that they live. Barbie and her stories are too far removed from the children that live in South Africa, many of whom live in poverty.

When I spoke to local women about their dolls I was quite shocked that many people laughed when they talked about how they destroyed their Barbies. While I did the same, in the course of my performance works, it gave me no joy to destroy the dolls that I had collected. It was as though Barbie was just an outlet for their grief. Their grief came from being too short, not thin enough and failing to fit into the model body.

CZ: To finish this conversation, I would like to ask you whether you think that you could have done the same work with the Barbies in Johannesburg. Do you think this piece and other works on this issue can be made and/or transported across the globe?

SM: I would have never made it work that well here in Johannesburg. First, the struggle to find Barbies would be very challenging because the dolls are rare and so expensive. Secondly the art audience for this kind of work is still very small. But I do believe that I can transport this to the rest of the world. I am hoping to transport it to New York for the performance biennial. Performance art works much better with a responsive audience.

Photo at top from Deveron Arts – other photos by Jess McCabe – full disclosure, Jess spoke on a panel in Huntly when the exhibition opened

Senzeni Mthwakazi Marasela is one of South Africa’s young up and coming female artists. Her work investigates the missing pieces in both her personal and her country’s history and the role of female self perception in a globalised world. She lives with her children in Boksburg in Gauteng/South Africa.