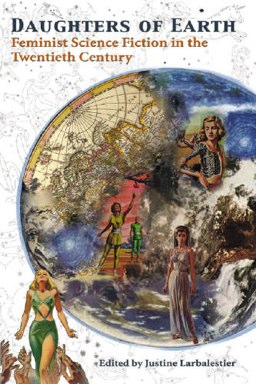 Daughters of Earth: Feminist Science Fiction in the Twentieth Century

Curious about feminist science fiction, but don’t know where to begin reading? Daughters of Earth: Feminist Science Fiction in the Twentieth Century is a great place to start.

Justine Larbalestier has curated a collection of 11 short stories, each followed by an analysis from a feminist science fiction academic or critic.

“I wanted to find a balance in this anthology between introducing people to long-out-of-print stories they would never otherwise read and reprinting better-known works that have never been the subject of study,” Larbalestier says in the introduction. (You might recognise Larbalestier’s name – she is also the young adult author who recently drew attention to the ‘whitewashing’ of the US cover for her novel Liar.)

Daughters of Earth opens the door to a selection of feminist and women’s science fiction writing, then puts these examples in historical and literary context through critical essays written in a broad and accessible tone. These essays sprout hundreds of branches, tantalising the reader with glimpses of the history of US women’s speculative fiction, the development of science fiction as a genre, the development of feminist ideas, feminist critique and the relationship between ‘genre’ and ‘literary’ writing.

The only story in the collection I’d already read was Octavia Butler’s take on zombies, ‘The Evening and the Morning and the Night’, set in a world where a cure for cancer has been found. The children of those that took the drug develop a degenerative disease which causes sufferers to descend into violence and self-destruction. But the other authors were new to me; Butler excluded, the well-known names of feminist science fiction such as Joanna Russ, Marge Piercy and Ursula Le Guin are absent here. So it was a refreshing introduction to less familiar feminist science fiction writing, which will no doubt hit the mark on appealing to a broad range of readers.

Andrea Hairston’s take on Octavia Butler’s work was particularly interesting, talking through the history of black science fiction writers, the assumptions made by publishers that their readership was almost exclusively white and male, and would only be interested in white characters, and also offering her own take on this story and on Butler’s science fiction more generally.

Apparently, Butler has been criticised by some feminists for leaving her protagonists – usually young black women – with little or restricted agency. But, Hairston argues, this interpretation misses how “Butler’s heroines stuggle to act – against or in the face of enormous loss; against the persistence of the old regime in themselves and others; against the despair and hostility that can impede change.”

‘The Fate of the Poseidonia’ by Clare Winger Harris was one of the first science fiction stories by a woman to be published in a US pulp magazine. The protagonist discovers a Martian plot to steal water from Earth and finds out that the woman he’s been courting has rejected him in favour of a Martian. The story is one thing, but even more interesting is Jane Donaworth’s essay on how the story reflects racist anxiety about miscegenation in the 1920s and the conditions faced by women seeking to publish in these magazines.

“As a rule, women do not make good scientifiction writers,” ran the introduction to this story when it first appeared, after winning third prize in a competition by Amazing Stories magazine in 1927, “because their education and general tendencies on scientific matters are usually limited. But the exception, as usual, proves the rule, the exception in this case being extraordinarily impressive.”

This is a very entertaining collection of stories, which certainly broadened out my knowledge of feminist science fiction and the role that speculative fiction has played, both in responding to and developing feminist ideas

Alice Eleanor Jones’ story from 1955, ‘Created He Them’, is set in the US after an unnamed (probably nuclear) disaster, which has left most of the population infertile. Those children that are born are whisked away by the government at an early age, never to be seen by their parents again. The protagonist, Ann Crothers, is stuck is an abusive marriage – partly because she and her husband have been able to conceive seven children. Ann barters with her neighbours, exchanging quality time with her youngest children for food, which is in short supply.

In 2010, this subject matter seemed standard fare for science fiction, but Lisa Yazek explains that in the 1940s and 1950s in the US, this type of subject matter was routinely dismissed as “diaper” or “housewife heroine” stories, both by fans and critics, and later even by feminists.

Writing about Pamela Zoline’s 1967 experimental story ‘The Heat Death of the Universe’, also featuring a housewife protagonist, Mary Papke says: “While the housewives in all these science fiction works are extremely limited in agency, they are nonetheless threatening. These stories’ power lies precisely in their threat of disturbing the status quo of male-female relations and the future of the worlds science fiction investigates.”

A chimpanzee is the protagonist for Pat Murphy’s ‘Rachel in Love’. After his daughter’s death, Dr Aaron Jabobs manages to imprint her consciousness on a chimp. Rachel, therefore, has two memories: her early life as a chimp, born in a lab, and her life as a blonde teenage girl. Joan Harran relates the story to the cyberpunk, male-dominated stories written by Murphy’s contemporaries, and also to Donna Harraway’s influential 1985 feminist essay ‘A Cyborg Manifesto’.

We get brief, and for me pretty shocking, insights into the biographies of male science fiction writers as well. In one essay, Josh Lukin reveals that Phil K Dick in 1963 “decided that his third wife was ‘a pseudo-demonic creature, the destructive feminine principle of the world’, and began uncontrollably filling himself with amphetamines and anti-depressants. Naturally, given the temper of the times, Dick’s physician noted his marital problems and diagnosed Mrs Dick with bipolar depression. Dr A, with the local sheriff, had her committed for three weeks to a psychiatric hospital, where an attending physician recorded the observation: ‘Mr Dick is unable to control his wife.’ Upon her release, Phil forced Anne to spend three months taking Stelazine, an antipsychotic drug that he enjoyed but that can have permanent deleterious effects if administered to mentally healthy patients.”

Almost all of the stories are by US writers, while the critics are from North America, the UK and Australia. Without wanting to judge a book by its blurb, it was a bit disconcerting to read the anthology described as creating “a new canon of feminist science fiction”. Canons – or lists of ‘great’ or ‘noteworthy’ books – are inherently problematic: who gets to decide what books are included? Is it possible to come up with a definitive, kyriarchy-free list of ‘great books’? This collection is very interesting and readable, but surely only represents the tip of the iceberg of English-language speculative feminist writings in this genre.

What the book is, is a very entertaining collection of stories, which certainly broadened out my knowledge of feminist science fiction and the role that speculative fiction has played, both in responding to and developing feminist ideas.