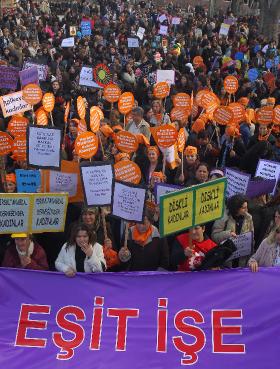 Turkey: IWD for those on the margins of society

The Istanbul-based Hürriyet Daily News carries a short piece containing interviews with three women who live, as the newspaper puts it, on the margins of society. Interviewed are Ecem Dalga (a lesbian woman who works for Lambdaİstanbul), Nevin Öztop (a bisexual woman who works for KaosGL) and Esmeray, a transsexual woman feminist from Istanbul.

“Since I started to wear a skirt and disclose my identity, my close male friends started telling me, ‘Don’t carry this table, you could injure your back,'” said Esmeray. “Also, my boyfriend’s friends started calling me ‘yenge’ (a word used for the wife of a relative).” Men’s politeness and sensitivity disturbed her, she said. “This is women’s problem in society. Men treat women as if they are incapable of doing things in life. Unfortunately, some women also internalize this belief.”

As a transsexual, the difficulties Esmeray faces are not harder than other women’s problems, but they have different aspects. “As a transsexual, if I walk in Beyoğlu at night, a man can easily come and ask me, ‘How much?’ because all transsexuals are prostitutes in the eyes of wider society,” she said. “But that does not mean this is only our problem. Unfortunately, men’s understanding is that only loose women come to Beyoğlu after midnight,” she said.

“We experience difficulties at different levels, but in the end they are all related to the gender issue,” Esmeray said.

On today’s International Women’s Day with its theme of Equal rights, equal opportunities: Progress for all, Esmeray’s words are a timely reminder of how far many women still are from achieving those rights and opportunities.

This is especially clear if we look at the plight of trans women in Turkey who are currently subject to what amounts, in my opinion, to an undeclared war on them. Anti-trans violence and bigotry has been escalating out of control to the point that Human Rights Watch, Pembe Hayat, ILGA-Europe and IGLHRC recently wrote a joint letter to the Prime Minister of Turkey requesting that urgent action be taken to stop the murder of trans people and to protect them from violence and discrimination.

ILGA-Europe will visit Turkey in April to assess Turkey’s compliance with its European and international human rights obligations towards trans people and to document the violence, discrimination and other obstacles they face. The organisation has asked the authorities to discuss proposed measures to address the human rights concerns of the Turkish trans population.

It is to be hoped that the Turkish government’s response will address the problems at their roots by tackling the severe stigma against trans people: social exclusion and poverty on the one hand, and the culture of gender stereotyping that drives the violence and hate on the other.