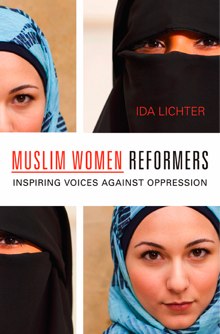 For anyone who wants a broad picture of Muslim women reformers and their organisations around the world, Muslim Women Reformers: Inspiring Voices Against Oppression by Ida Lichter, is a must. I was familiar with Ayaan Hirsi Ali and Irshad Manji, but many of the individuals described here were unknown to me. The author states her categories of reformers from the start, clarifying at least two major groups: those who reject Islam as incapable of reform and a diverse majority who seek to reform Islam from within, by revealing the egalitarian views they believe are expressed in the Koran and have been systematically suppressed by a tribal, patriarchal society.

Secular feminists like Ayaan Hirsi Ali and others who advocate open discussion or abandonment of Islam face death threats. Most pious Muslim women who want to challenge religious authorities have yet to stake their claim. Iranian women reformers, however, have challenged the Islamic theocracy over the last few years by taking part in peaceful street demonstrations against discriminatory laws and collecting signatures for the One Million Signatures Campaign. Their confrontation was met with arrests, violence and detention.

The author does not enumerate the litany of misogynistic oppressions in a themed chapter; instead she weaves them into the biographies, building a profoundly moving and diverse anthology which faithfully records the experiences and visions of the women. Her aim is to amplify these courageous, often passionate voices. For example, Saudi Arabian reformer Wajeha Al-Huwaider laments: “I wish I knew why the situation of the women in certain Arab states is not condemned by the countries of the world, and does not enrage their citizens. Why do the human rights activists ignore their suffering as though they do not even exist?”

The book is dedicated to the fallen Muslim heroines who fought hard against institutionalised persecution but died as targets of jihad. Some of their biographies are included, presumably as a sign of respect and in the hope that their example will be followed and their sacrifices remembered. Lucid in structure, the book spans the Muslim world, with backgrounds of the relevant countries followed by compact, eminently readable profiles of women reformers and their organisations. Their stories are supported by a significant reference section for researchers and comprehensive reviews of reforms. A series of cartoons, interspersed in the text, provides much amusement and surprise.

Through the eyes of the reformers, the narrative covers many relevant issues specific to the Muslim world. There is also a useful websites chapter, glossary and section on the Arab Human Development Report 2005: Towards the Rise of Women in the Arab World. A chapter on male reformers who support Muslim women’s rights uncovers unconditional support from a few Muslim men and may indicate a promising trend. According to Afghan reformer Massouda Jalal, men must be co-opted in the liberation of Muslim women.

Particularly refreshing is the lack of emotive judgment and the large number of Arabic sources in translation from newspapers and Muslim reform websites rarely utilised by the mainstream media in the UK. The new reform websites and blogs are important primary sources of information, but the author warns these may become scarce as more and more sites are being shut down. The internet has emerged as the pre-eminent form of communication and dissemination of material for many dissidents, particularly in countries like Iran, with restricted freedom of expression or association. For example, Iran’s ‘Weblogestan’ consists of more than 100,000 bloggers, some of whom are political activists who have been arrested and tortured by the Islamic regime. Iranian women reformers have been using the internet consistently to collect names for petitions against discriminatory laws. One such drive is the One Million Signatures campaign, aimed at amassing names for petitions against discriminatory laws.

The silence of Western feminist organisations is emphasised by some of the reformers and represents a disturbing aspect of the discourse. Norwegian feminist Hege Storhaug campaigned against the oppression of Muslim women in her country and was then labeled paranoid and ‘burkophobic’. According to Lichter, closing down discussion in this way serves to discourage activists in oppressed environments. In a related section on the transnational organisation, International Campaign against Honor Killings, the debate of universalism versus relativism is presented as unresolved.

The UK, home to a substantial Muslim population, does not feature much in this book, apart from profiles of several secular Iranian-born reformers, and the Safra Project for Muslim lesbian, bisexual and trans women.

The strength of the Muslim women’s reform movement varies from country to country, according to this book – major reforms against discriminatory legislation have been achieved in Tunisia and Morocco, but similar movements in other countries will require time and courage. Reformers will also need international assistance. According to Algerian feminist Khalida Messaoudi: “Without your support, without the women’s and human rights movement of the countries of the West, we are losing this battle of life and death.”

As an attempt to categorise and describe a gathering movement, the book is eminently successful and indispensable for understanding the state of Muslim women’s reform worldwide.

Jillian Krane is a freelance writer who has travelled extensively without becoming much wiser. She relies heavily on the Internet and London underground for inspiration