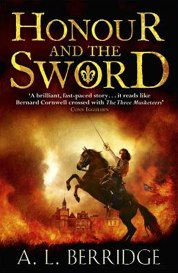 New review: Honour and the Sword

A L Berridge’s swashbuckler is a challenge to this male-dominated branch of historical fiction, says Sian Norris

There are two types of historical fiction. The type where women are the centre of the action (usually focusing on sexual intrigue, romance and more sexual intrigue), as demonstrated by Philippa Gregory. Then there are swashbuckling adventures (where men draw swords and wage battle), as demonstrated by Bernard Cromwell. The former is overwhelmingly written by women, the latter by men. Enter A L Berridge, a woman writing the latter, an epic adventure of rebel men fighting against their Spanish occupiers, at the heart of France’s Thirty Years War.

Popular culture fans will recognise A L Berridge as the former executive producer of Eastenders, who left, according to the press release, amidst a “flurry of headlines” and has since used her grounding as a soap producer and English teacher to write Honour and the Sword, the first in a trilogy dealing with the mid-1600s.