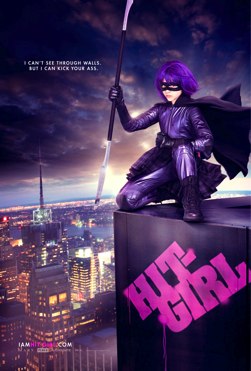 Okay, so I had to do it. I tried to hold back and couldn’t, I am compelled to write an essay on Hit Girl, the assassin from recent comic book-based film Kick-Ass. So what is it about this character that’s so irresistible to me? Everyone is talking about how an 11-year-old girl says ‘cunt’ to a bunch of hard-nut drug-dealer chaps, but that’s not the only thing to discuss here. Note, this is not a review. This is a review, and one that puts the actions of Hit Girl in context very nicely. But stepping aside from the merits of the film, I think the character and the way people have reacted to her point to several interesting political discussions including the sexualisation (or not) of violence, the invention of childhood and role models in the media.

Firstly, I have to disagree with Melissa Silverstein, writing at Women and Hollywood, when she says that the violence perpetrated by Hit Girl is not sexualised because it is being done by a young girl against grown men:

So much of violence we see in films is perpetrated on women because they are women. Hit Girl kills because that’s what her daddy (Nicholas Cage) taught her to do (let’s not get into the bad parenting here.) You know you’re into different territory when the first scene you see of your heroine is her father teaching her take a bullet in a vest.

Stick a little girl in PVC, yelling cuss words meaning female genitalia, and it will have sexual connotations for some portion of your audience. This is not because writers Jane Goldman and Michael Vaughn are deliberately including such nuances, despite accusations to the contrary in publications such as (surprise!) the Daily Mail. Instead it is thanks to years of mainstream movies (and countless other consumer products) sold by making violence sexy, playing on our socially-bestowed instinct to rubber-neck at the merest hint of taboo. Violence and sex, sex and violence, and that PVC! You just try to separate them. So, no, this is not an overtly sexual character, but the allusions to adulthood in her language and the unrealistic resilience she shows suggest that this character doesn’t fit neatly into the ‘child’ category either.

When confronted with the reactions to this film, part of me wants to yell “Newsflash! Children swear!” While we may automatically think of swearing as ‘adult language’, since when does it convey anything like maturity? I remember myself aged 16, spouting four-letter words in a nervous attempt to appear grown-up in a pub. Luckily, one of my best mates called me on it: “Come on Trace, you think they won’t ID you just cause you swear so much?” In my aim of avoiding an undignified ejection from that bar I’m sure language was the least of my worries (I looked like a 13-year-old boy until I was at least 20) but perhaps my reasoning was roughly along those lines. In retrospect I think my language would’ve only emphasised my appearance as an insecure teen.

This point about the inability of children to make free choices, especially in when confronted with pressure from parents or other caregivers, was far more attention-grabbing than any amount of swearing

The taboo of kids swearing relates to ideas about the invention of childhood, and how societally we create a line between adults and children. Swearing falls under the category of ‘adult’, and so, we’re taught, we should be shocked when children do it. Obviously, there are very good reasons why we came to separate children from adults. Childhood in the UK means legal protection from child labour and sexual abuse, and a right to time to grow and learn.

In this way the importance of drawing this line lies in the goal of protecting children, and I don’t see how pretending they never say bad words keeps kids safe. The ‘invention of childhood’ argument is one I generally dislike, misappropriated as it is by both paedophiles and modelling agencies in the guise of attributing choice to children. I think it’s important to go back to this root of the taboo because it highlights a misunderstanding of the point of the adult/childhood divide. The use of cuss words in this film reflects a reality that kids swear, exaggerated in the manner of the rest of the film in its spoof-like genre.

To consider the c-word more specifically, I think that Hit Girl saying “okay you cunts, let’s see what you can do now” puts two fingers up to a culture that attempts to market pink thongs to nine-year-old girls. When viewed as a contrast to the way young girls are often portrayed, it serves as a rejection of their positioning as the passive target of fierce sexualisation and consumerism, and as such I’d argue that using that word in that context represents reclamation of it rather than obscenity. I suspect it is precisely this that has so many pop-culture commentators wringing their hands. Indeed, to shift focus from this one sentence for a moment, one of the first scenes in which Hit Girl appears is in a diner with her dad, asking for a puppy and a Bratz doll for her birthday, followed by the comment “I’m just fucking with you, daddy” (and the confession that what she really wants is a switch-blade knife). This demonstrates both contrast and rejection neatly and overtly.

As Chloe Moretz (who plays Hit Girl) says herself, Kick-Ass is not putting Hit Girl forward as a role model to be followed by young girls since the film’s rating doesn’t even allow under 15s to view it. The character is not the main protagonist and is portrayed as a girl who has missed out on childhood somewhat. That didn’t stop me leaving the cinema and declaring that when I grow up, I want to be just like Hit Girl! Obviously I don’t intend to go out and hack people to pieces but I had to admire her combination of fearlessness and witty banter, and my attitude could use a dash more assertiveness. It was nice to see a girl finally go unpunished for her strength in a medium which celebrates it in boys and men over and over again.

Hit Girl’s appearance as a young girl lulls her adversaries into a false sense of security, so they suffer for assuming who she is based on what she looks like. This is the direct opposite of what advertisers and women’s magazines tell us about female appearance! As Naomi Wolf tells us in The Beauty Myth, people judge women based on our appearance more than they do men and there’s a whole industry based on condoning and encouraging this in order to make profits. It was empowering (and amusing) to see these tough guys realising they could not be more wrong in doing so.

What did get to me about this film is the nature of Hit Girl’s relationship with her father, ‘Big Daddy’, who raises her to be tough and to fight at the expense of a conventional childhood. The suggestion that this constitutes abuse is made in the tone of the film, and this means that one interpretation of the character is as a powerful abuse victim. This could be a good thing or a bad thing; she could be a positive image, thriving despite the experience, but it could also imply that she has more power in the situation than is the case. “She enjoys it though,” is only a step away from “she was asking for it.”

Because Hit Girl takes pleasure in the violence she commits, the point that she’s a child and has had no control over her upbringing has been less prominent in discussions of the film by critics and reviewers than the condemnation of the character because she enjoys it. To me, this point about the inability of children to make free choices, especially in when confronted with pressure from parents or other caregivers, was far more attention-grabbing than any amount of swearing.

In thinking about this character, it’s important to bear in mind these are possible political interpretations of the film in which she appears, and I’m saying nothing about the intended message of the writers. Hit Girl provides a welcome breath of fresh air in a culture where I’m told I should aspire to be youthful and I am marketed Barbie-doll fashion for grown women. She is a different kind of youth, not the passive image of innocence I am so frequently sold, but a picture of anger and rebellion (with a price) that has much more in common with my experience of being a woman. I believe the power of art is in the interpretations of the reader or observer, and it is exactly this that makes art indispensable as a tool for political change. Now, where’s my catsuit?

Tracey Plowman is a part-time superhero and social psychology graduate now working in social care. She lives in Guildford and her hobbies include reading, writing and flinging fire around on chains