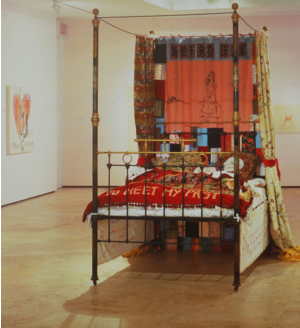 Quilts at the V&A

Selling its largest ever pre-allocation of tickets, the V&A Museum recently opened an exhibition dedicated to the ‘feminine tradition’ of quilting. As a self-declared feminist with an interest in so-called traditional crafts, I thought I’d take a closer look.

The exhibition spans 1700 to 2010 and explores the development of the craft through several themes: the domestic landscape, private thoughts, political debates, virtue and virtuosity, making a living and meeting the past. It dips backwards and forwards throughout the 300-year time span to join these themes together.

The exhibition centres on the creation of quilts by women, particularly through their use in the home and how they were seen to represent positive aspects of femininity and homemaking. It also includes reference to the quilts as forming part of an education for young women; for example a sampler map of England produced around 1800 by a 10-year-old girl. However, it also highlights the use of quilts to challenge these ideals, particularly to demonstrate political thought or alliances, by inclusion of images of individuals or events.

The most striking re-working of a traditional quilt was that by Caren Garfen, ‘How many times do I have to repeat myself’, which was created after a series of research interviews to produce a study of women’s homes, workplaces and caring responsibilities which “reflects the shared desire of her interviewees to move away from the workplace”, according to Sue Prichard’s Quilts 1700-2010: Hidden Histories Untold Stories. As part of the design images were included of domestic appliances alongside the women who were interviewed’s job titles and women’s magazine covers embroidered onto the patchwork blocks.

The quilts continue to reflect unseen and formally unrecorded women’s domestic histories as well as exploring the use of quilts as a means of subversion, self expression and independence

The strong visual juxtaposition of positioning old and modern quilts together highlighted the changing political situation and women’s rights, the most striking of which was the inclusion of the controversial Grayson Perry ‘Right to life’ which at first glance appears to feature an intricate patter over a ‘tumbling block’ background. However the images are of rotating foetuses “inverting the assumed role of the quilt, as a domestic object of warmth and comfort”, as part of a commentary on the abortion debate in the US in the 1990s. This was hung directly in front of a coverlet from the 1850s-1900s which featured embroidered passages from the Bible, which would have been used with hospitals or asylums to “offer spiritual comfort and guidance during times of duress”, Prichard says.

As a counter-point to the number of quilts by women, a small series designed and constructed by men were included. Quilting was carried out and seen as a suitable pastime for soldiers between c1850-1910 and reflected the precision and order required of military life. In the same way as many of the women’s quilts, these were also put on display to demonstrate the skills and qualities acquired by the individual.

The impact of economics and class was also an underlying theme of the exhibition; many of the quilts that have been able to be preserved were those either created by women who were time and/or resource rich, or those who were unable to afford a quilt through other means. The quilts exhibited also reflected the changing trade routes, both nationally and internationally, which enabled a wider use of materials with trading centres also becoming associated with high quality crafts. The production of quilts by women in the home, particularly in areas of heavy industry, was evident from the industrial revolution onwards. This became form of employment for women in rural areas, supported by the Women’s Institute and the Rural Industries Bureau, as well as enabling access to skills and a social network. The pieces displayed also demonstrated the shifting nature of society; as the aspiring middle classes started to produce or purchase quilts they began to be considered as an art form, therefore despite criticism of its inclusion, Tracy Emin’s ‘To meet my past’ comfortably fits within this theme.

Germaine Greer argued in The Guardian that the exhibition would not be able to recognise the experiences of collecting different materials and integrating them into a quilt or object of your own making. However, this forms a significant part of the information about quilts and their backgrounds, including the first written evidence of quilt creation and ownership by Priscilla Redding (1654-1723) whose quilted cot cover was passed down through the family with her personal diary.

Also included was a video featuring inmates of HMP Wandsworth explaining their own personal responses to the ability to participate in craft work as part of a project working with prisoners. This enabled the viewer to see the quilt in a different light, as well as have an understanding of the potential for ‘release’ that crafting can take in different circumstances. Greer also argues that the exhibition would exclude other perspectives beyond Western history, and whilst the primary focus is on British quilting, the exhibition recognises the international dimension of crafting; the inclusion of a short video made by Nicola Naismith, ‘Between counting’, considering both the production of needles manufactured at a rate of 25 million-30 million per week in India as well as offering an “insight into what happens before the needle punctures the surface of the cloth, and how the body can be viewed as its own site specific”. Also included is ‘A Chinese dream’ by Susan Stockwell which uses new and old bank notes to create a visual response to the Chinese economy and global trade.

The Changi Quilt from Victoria and Albert Museum on Vimeo, click through for transcript.

I found that the quilts were also able to demonstrate their emotional power, particularly those that have been produced by individuals or groups in response to significant events. For example, ‘The Presence of Absence’ by Jennifer Vickers was constructed of 38,000 one centimeter squares of paper to “explore notions of identity by examining the connections between individual and collective experiences, seeking to contrast personal and institutionalised memories through the use of forgotten narratives”. Each blank square represents the death of a civilian in the Iraq War; interspersed with pictures of the first 100 soldiers also killed, the white space overwhelming the object. The notion of quilts retaining emotional past memories and histories was also demonstrated by The Rajah Quilt (1841) which was made by women on a convict ship on their way to Australia and another stitched secretly by members of The Changi Girl Guide Group in 1943, whilst interred in Changi Prison, Singapore.

These quilts really made the personal history, both modern and old, resonate where, as Prichard says, “each patch communicates a story of survival; a girl’s endurance, her time passed, and her refusal to disappear from the visual landscape. The patches testify to the hope and independence of individuals through the creation of beautiful objects, seemly at odds with the difficult conditions in which they were created.”

The collection has brought together a vast range of quilts, all of which featured stunning handicraft, for which the skills and concentration of an individual to produce was understated throughout the exhibition. The quilts continue to reflect unseen and formally unrecorded women’s domestic histories as well as exploring the use of quilts as a means of subversion, self expression and independence. Suggesting that the art of quilting will continue to subvert and politicise the notion of ‘traditional’ crafts, Liberties has put on display a series of quilts which feature sexually explicit images in displays of ‘sexual tension and ambiguity with an embroidered quilt at the centre of each … these windows will shock as well as entertain, all in the name of quilts.”

Photo of Tracey Emin’s ‘To Meet My Past’, @The Saatchi Gallery Gallery, London

Tamasine Pottle was taught to knit by her mum and has always been interested in ‘female’ crafts. She is a self-declared feminist and is currently studying towards an MA in equality and diversity