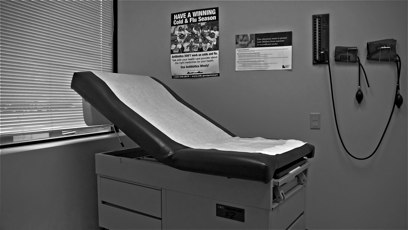 What happens when you don’t like what the doctor orders?

I recently had an adverse reaction to some antibiotics I was prescribed, which resulted in my throat swelling up and a burning sensation down my throat and into my chest, and two separate trips to A&E.

The first went fine. The doctor (male) prescribed me some antihistamines to reduce the swelling and kept me in for a couple of hours for observation, after which he was satisfied I wasn’t getting any worse and sent me home.

A few days later the throat and chest pain persisted, so I went back to A&E, for an out-of-hours appointment. The doctor (male) seemed completely disinterested in everything I said. He scanned the torch past my throat, paying little attention to see any swelling. He then asked me to stand up and turn around (which made me think of that scene in True Romance where James Gandolfini’s hitman, Virgil, asks an uncertain but compliant Alabama Worley (Patricia Arquette) to do the same thing; disorientating her before he punches her in the face).

The doctor asked me to pull up my cardigan, which I did. He then asked I pull up my dress too. Now feeling in a similar uncertain state, I asked “Pull it up how far?”

“To the top, I need to listen to your heartbeat” came the reply.

“WHAT?!” I asked loudly, turning around, irritated and offended by his nonsensical suggestion . “Just put the stethoscope at the top of my back, I’m not pulling my dress up!”

He just shrugged as if to say “please yourself” and with far greater ease, I slid my dress down a couple of centimetres at the top of my back. Why did he not suggest this in the first place? I felt he was leering at me and was more interested in seeing what knickers I had on than trying to genuinely establish what the problem was.

When I left, I remembered a time 10 years back, when I visited a chiropractor who asked me to remove all my clothes except my thong (bad choice for that appointment!) to massage a small section of my lower back. Did I really need to be topless for that? He spent too long time massaging me and I could hear his quickened breathing. I left hurriedly feeling embarrassed and awkward about what had happened.

It got me thinking about the situations, we, as women can find ourselves in; feeling vulnerable and powerless when putting our trust in specialists or authority figures. I realised that 10 years ago, I didn’t have the confidence to question the chiropractor. I had also been brought up to believe my role, as a woman, was to please and accommodate people (especially men).

Though I felt angry with the doctor, it also made me realise how easy it can be in some situations to take control, set personal boundaries and not become a victim of someone else’s dubious directions. It’s a powerful lesson to learn and one which, for me, has only come through experience.

Often women have negative associations with growing older, but I can honestly say I’m relishing the process. I’m more confident in my body, self-possessed and assured enough to state my needs and my boundaries.

Since that appointment I’ve spoken to female friends and family members, younger and older. The overwhelming reaction is outrage that he asked me to do it but also that I was “brave” to refuse to strip off.

Many also confided similar experiences where they have felt pressure to acquiesce as the doctor probably knew better than they did. That makes me a little sad as I strongly feel women have the right to say a firm “NO” to anything they don’t feel comfortable with and demand an explanation as to why the request is necessary.

I wanted to share this story in the hope it will give women confidence to question people’s true motivations and maintain their own boundaries.

Photo by Maggie Osterberg, shared on Flickr under a Creative Commons license

Bryony Long is an English literature graduate working in communications. She lives in Leamington Spa where her passions are watching live music and volunteering to promote sustainable living. She is currently saving up to take a year out and go backpacking across the Americas