Reporting from their first Women Speak Out event in London, the discussion ranged over some interesting territory, from the impact of the recession to fear of violence against women and education.

Five female newsreaders have resigned from Al-Jazeera and have ” filed a complaint about ‘repeated offensive public remarks’ about ‘clothes and decency’ from a senior al-Jazeera employee”, reports Pickled Politics. 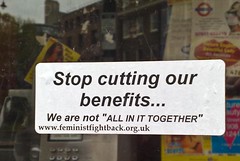 Interested in “how to think like a feminist economist”? Then read this at One the Issues Magazine:

My experience as a feminist economist means that I vigilantly watch for intellectual sleights of hand that present the interests of the rich and powerful as the interests of us all. When bankers, corporate executives and their minions unite behind purported economic truths, I challenge their arguments, their logic and their appeals to the so-called “laws of the market.” By looking behind and around standard economic narratives I can construct alternative stores connected to the real world, the actual historical record, and perhaps most importantly, the questions that are not being asked – many of which, it so happens, have to do with women. There is little in economics that is “gender neutral.”

Abel Moreno and his girlfriend were stopped by a police officer in the US – who proceeded to sexually assault her. Moreno called 911, but now faces deportation because he didn’t have a visa. The Curvature has the full story, pointing out:

Abel Moreno showed immense bravery, the kind of courage that most people do not have. His actions helped other victims feel as though they could come forward and speak of what was done to them. His actions undoubtedly prevented countless other women from being similarly assaulted by someone in a position of power. Because of him, this officer will not be able to traumatize more women under the banner of state authority.

And as thanks for that, for being one of the better residents that U.S. society could hope for, we’ve decided that he’s not worthy of being on “our” land anymore.

At least 200,000 women are hospitalised in Brazil each year, because of damage caused by illegal abortions, reports Time:

The study has shocked doctors, who were surprised at just how common the illegal procedures are. “I think the big conclusion we draw from this is that the woman who has an abortion is a typical Brazilian woman,” says Marcelo Medeiros, the economist and sociologist who coordinated the government-funded study. “She could be your cousin, your mother, your sister or your neighbor. All the evidence shows this is a serious problem and one that is not being debated openly.”

Outgoing President Luiz Inácio Lula da Silva, who says he is personally against abortion, is on the record calling for the state to discuss it as a public-health, rather than as a moral, issue. The popular President, however, has done little to foster any wider debate on legalizing the procedure, and his government has not made reducing maternal mortality — which is tied to the unsafe abortions — one of its health goals. The two leading candidates to replace him in October’s presidential election have adopted a similar stance and both say they have no plans to change the current law. Only Marina Silva of Green Party, the outsider in the race, has said she supports a liberalization of current rules surrounding abortion. But even Silva has not said that she is advocating outright legalization

True Blood fans – and critics! – take note: Renee from Womanist Musings and Tami from What Tami Said are launching a yet-to-be-named podcast which will apply their “special brand of womanist anti-racist analysis” to the vampire TV show.

Finally – Danny Dyer’s latest film ‘PIMP’ made £205 at the boxoffice in its first weekend – Liam Barrington-Bush started a fundraising drive to see if he could raise that much for Solent Women’s Aid. This has been a fantastic success, flying through Twitter – so far £735.00 has been raised, 359% more than PIMP made.

Photo by secretlondon123, shared on Flickr under a Creative Commons license