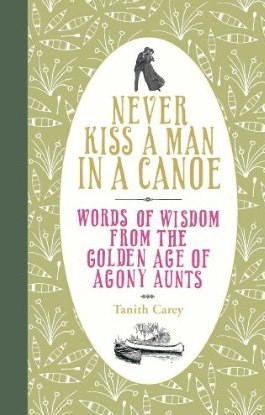 New review: Never Kiss a Man in a Canoe

Advice dished out by agony aunts and uncles from the 1850s to 1960s demonstrates how much has changed – and how much has stayed the same, argues Sian Norris

This charming collection of agony aunt (and uncle) advice from the 1850s to the 1960s would make a fantastic present for anyone interested in social history, attitudes towards men and women in the last 150 years, or as a companion book to dip into to discover something more about what women and men were, and still are, concerned by when it comes to love, relationships, family, fashion and health.

The collection has been compiled by Tanith Carey, who introduces Never Kiss a Man in a Canoe: Words of Wisdom from the Golden Age of Agony Aunts by explaining her interest in problem pages, and how this book explores the evolution of the agony aunt column, to its place in magazines today. She praises the modern problem page for being a sanctuary that women can turn to with emotional upsets or psychological problems, something that, she suggests, was missing in the matronly and rather strict messages of the advisors of Victorian Britain. Personally, I find this praise of modern problem pages fairly, well, problematic. It seems to me that although agony aunt columns are and can be a real help to women, often their advice is just as patriarchal or dare I say it sexist as their stiff upper lipped, corseted ancestors. For example, Tracey Cox recently advised a woman who was concerned about her lack of sex drive or sexual desire for her husband to give him “duty shags” as “your husband has the right to expect sex”.

Elsewhere, bridal and women’s magazines regularly tell women who express a concern that their fiancé might visit a strip club (or worse) on their stag-do to just put up with it because “that’s what men do”. Something in fact, that led to me and other members of Bristol Feminist Network flyering women’s mags with Object’s Stripping the Illusion text. I accept that in offering women advice on some issues, problem pages have come a long way, but there are areas where they still maintain the status quo and traditional narratives about what men and women should and shouldn’t do.

Honourable mention should go though to the now defunct Just 17 which, despite becoming more and more commercial in later life, always had great problem page advice. They never told readers writing in to say they thought they might be gay that they were “going through a phase”, but instead gave helpful information about where to find other young gay people, and explained to young women that periods were not in fact the end of the world but just part of being a woman and nothing to worry about. I always remember those two letters, I don’t know why. Probably because it was such refreshingly good advice…