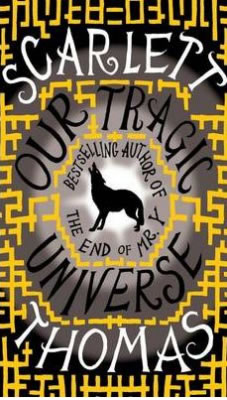 When a novelist creates a character who is also a writer, it is natural to assume a link between the struggles of the character and the author, and that when the character talks about different ways of writing and the purpose of stories, the author is considering, while writing, why they are writing, and how, and if it is the best way in which to do so.

Scarlett Thomas was first published as a mystery author, though perhaps a deliberately satiric and genre-bending one, with the three books in the Lily Pascale series. Her later books, PopCo, The End of Mr. Y and now Our Tragic Universe, are all at least partly driven by the mystery form – her intellectual and self-aware protagonists are drawn to puzzles and problem solving, and this curiosity in turn drives the plot. In Our Tragic Universe, part of the puzzle Thomas and her heroine Meg try to solve is how to write outside of genre and the formulaic Aristotelian narrative structure. Meg has a novel that she has been trying to write for ages, and keeps deleting and rewriting, while churning out teen genre novels under a pseudonym, the occasional science fiction title under her own name, and writing reviews to stay solvent.

Our Tragic Universe is also about relationships; Meg’s long-term and oppressively gloomy boyfriend Chris, her longing for an older man, Rowan, also unhappily taken, her friend Liz who, bored with a sexless relationship to a perfectly pleasant man, is having an affair – we first meet her as she is desperately trying to hide evidence of a recent tryst. But this is Scarlett Thomas – of course this book passes the Bechdel test. She also looks at the relationships between Meg’s friends, some of whom she has recently alienated in an argument (about writing), her students (she teaches a writing course), their families and her own, including some sequences from her childhood about her own unhappily married parents and the precocious friend who lived next door.

Everyone is in variously tangled states, talking about what to do about each other, how to be fair, how to be happy, science, philosophy, belief, and also the slightly esoteric – ghosts and cosmic ordering and astral planes, flower remedies and ESP and a theory of the universe (in a book that she accidentally reviews for the newspaper) of infinite love and immortality, in which everyone must be a Joseph Campbell-style questing hero, and which accommodates the seemingly inexplicable, highly unlikely and simply magical.

Ultimately, though, it all comes down to narrative. Contrasting with Meg’s genre-writing teaching and the efforts of her students, Thomas includes an anthropologist character, Vi, who champions the idea of a storyless story, which she sees as feminine and non-patriarchal, where “all structures must contain the possibility of their own non-existence”. Lies and anecdotes, memories, myths and fairy tales, Zen koans and jokes – Our Tragic Universe is full of them, and Thomas implicitly compares their structure and elements to the wider narrative of the novel itself. Meg attempts to bring her novel to the perfection of the storyless story, the reflection of life as it is; she puts more of herself and her life and ideas into it, removing plot and structure.

Although there are some minor weaknesses, unjustifiably odd and awkward similes (“Thin folds of skin puffed around his eyes like rows of underfed basking sharks”), and a couple of instances of characters delivering inconsistent discursions mid-conversation to elaborate on a particular point, these are forgivable distractions from the brain candy of conversations and thoughts that include lines like “We need fiction because we die”. Thomas is always a pleasure to read, her novels zipping along, full of ideas and theories and intellectual discussions, examined magical elements and dynamic female characters. Our Tragic Universe takes another step further away from puzzle-solving mystery plotting, leaving some questions unanswered, some relationships unresolved, and plenty to think about.

Katherine Wootton is a freelance writer, and television and film professional from Canada, currently living in London