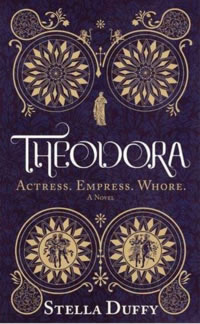 Constantinople, the 6th century. Not, one would think, the optimum setting for a wild history about female survival, success, adventure and vindication. Well, ‘one’ would be wrong. Theodora is about as far away from a ponderous Byzantine funerary procession as it’s possible to get. Instead it’s a celebratory cry of admiration, held together by the blazing charisma of its protagonist. The prolific and award-winning novelist Stella Duffy’s 12th book – and her first historical novel – brings us the entirely true story of Theodora, the woman who became Empress, politician, heroine and co-ruler of the city.

The novel’s jubilant ending, its pomp and celebration, are all the more garrulously welcomed for their distance from Theodora’s beginnings. The young Theodora and her sister were actors, acrobats, singers – and child prostitutes – sold out of poor necessity into a life of smiling performance and man-pleasing both on and off the stage. While Duffy makes much of her young heroine’s comic flair, charisma and raucous talent, she skilfully includes chilling details about the often abusive reality of life for these girls, often as young as 11. She mentions the rapes, the unwillingness, the exploitation and the lack of selfhood of children forced into using their bodies to make their living. Theodora’s world is a tough one, for which the audience’s applause does not compensate. After the stage is vacated and the laughter dies down, the actors go to rich men’s homes to placate their desires and sate their lust.

An entire book could have been set in this domain of performers, backstage brothels, baying crowd members, eunuch dance teachers and bawdy dwarves (one of whom, Sophia, becomes Theodora’s close friend). But Stella Duffy’s reach, ambition and skills are far greater than that. In Theodora she has met he equal at last, a woman so very energised and tough that she packed more into her one life than most families do across several generations. The dialogue of the book is salty and sweary, the apt historical details lightly and lovingly carried, its heart ripe with pain and valour. All the ingredients, in short, of a bestselling smash hit with a guaranteed happy ending that leaves the reader grinning all over and crackling with some of Theodora’s own fire.

Theodora’s fate is the triumph either of self-determination, or of false consciousness

After leaving the theatre Theodora falls in love with an untrustworthy governor, setting up home with him in the painful heat of North Africa. When that ends in betrayal and acrimony, she makes her way back to the city, entirely alone. Along the way she experiences a religious conversion, admission to a network of would-be religious rebels and thence into the various echelons of Palace government, first as an advisor about a social event hosted in the city and then, astonishingly, as the wife of Justinian, the Emperor. Duffy is as precise and impressive on the fine details of Byzantine realpolitik, palace etiquette, recent history, legislation and warcraft as she is on the social lives, racial and religious origins, home comforts and marketplace squabbles of Constantinople’s less privileged citizens.

Throughout the book, Duffy cleverly balances two interpretations of Theodora’s life: the celebratory and pragmatic take that has a plucky heroine doing the very best she can with whatever she’s got in a patriarchal and limited society; and the victim who has always been the tool, object, subject and exploited slave of men’s sexual, religious, economic, labour and political intentions.

Theodora’s life was an adventure, but she almost never had a choice in what she did. Had she said no to any of the great shifts in her fortunes, it would have made no difference, it would have been done to her anyway. Her fate is the triumph either of self-determination, or of false consciousness. Duffy’s political intelligence and awareness of this central ambiguity infuse the novel with a haunting crispness and realism that takes it far away from the breastplates-and-omens airport historical novels it might otherwise be lumped with.

The end of the novel leaves the reader hungering for more, with a lust equal to Theodora’s. Duffy has mentioned in interviews that a sequel is in the works. It is in this eagerly-awaited second book that Theodora will finally wield her natural strength, intelligence and power in her own way, passing legislation that protects women and girls in the sex trade and becoming an advocate for ordinary city people. They say all politics is theatre – Stella Duffy makes of Theodora a character worth a dozen encores. Long may they both reign.