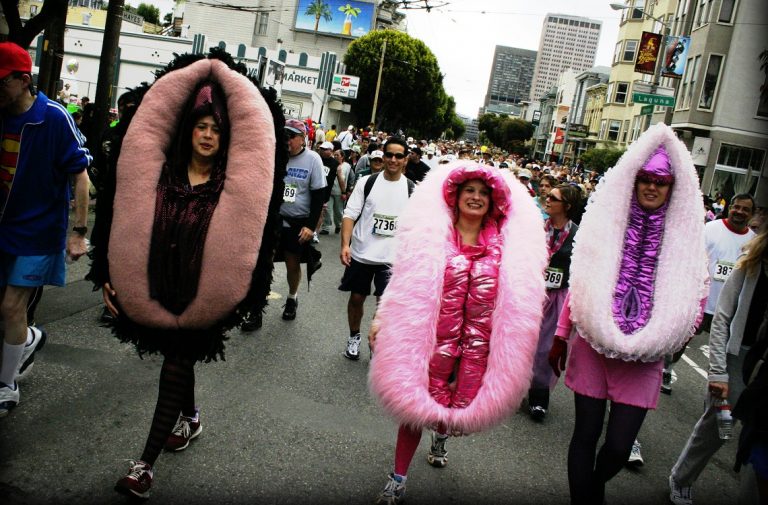 “My daughter’s got a part in tonight’s performance,” I hear a rather tall man dressed in a tweed jacket tell the woman with glass beads behind me. “Oh, how lovely,” she says, “you must be very proud….”

We could have been enjoying pre-theatre drinks anywhere, with tickets to see King Lear stuffed into our pockets. In fact, we were gathered in the Bristol Old Vic awaiting the start of The Vagina Monologues by Eve Ensler – how very bohemian of us, how very daring!

I confess that I had never read The Vagina Monologues. I was fully aware of its existence, and the fact that it was performed at various locations across the UK each year in aid of V-Day, a charity (some would call it a movement) established by Eve Ensler in response to violence against women. And, I knew that Eve Ensler had interviewed more than 200 women across the globe from the ages of six to 75 about their vaginas, something that most women had quickly, even gratefully responded to. The Vagina Monologues are the collation of their stories – heart wrenching, hilarious, touching and revealing, they had been the subject of derision and scorn as much as exalted praise and adulation. Knowing all this, I cast aside my very British British-ness in preparation for my foray into an evening of Vagina territory.

I had expected the audience to be almost exclusively female, but it was not the case. Joining the tall man in the tweed jacket were many of his male counterparts, old and young. Some seemed blissfully unaware of the treat that was in store for them, others were there in a show of support, a few were there on dates (a brave choice), and a small collection seemed to be there under duress. But, be they male or female you could spot a Vagina virgin, myself included, from across the studio – they were those bewildered looking specimens, an expression of expectancy and unease churning across their faces.

When the suspense became almost too much to bear, a long row of women dressed in red and black filed onto the stage where six carefully placed microphones and stools stood glinting under a single spotlight. “Viva la Vagina!” declared a crimson emblazoned banner hoisted high above the stage. Our hostesses sat on a long bench running beneath it. They sat looking at us. We sat looking at them. “We’re going to take you on a bit of a journey tonight,” the narrator told us. “There will be highs, and lows….” Well, we were duly warned.

Although fully prepared to have my sensibilities challenged during the ensuing piece, I had never contemplated just how remarkable the performance might be. Each woman performed her socks off, contributing to a standard of theatre rarely seen from studio productions. We were entertained, we were engaged, and we were completely, utterly, unbashfully absorbed by every morsel that they had to deliver. Not that our commitment as an audience was easy; The Vagina Monologues produced such a deluge of reactions from us all – pride, disgust, delight, embarrassment, sympathy, outrage, to name a few – that we were left exhausted as the female condition was stripped bare, less to be examined than celebrated. There was nowhere to hide, and all that mattered were the women on stage who had invited us to join them in their exploration.

While the monologues inevitably bring the female body into the spotlight, with special pontifications reserved for ‘down-there’, there is much more to digest here. The stories include a 72-year-old woman recounting her first orgasm, an experience that terrified and shamed her into never again exploring further. “I haven’t been down there since 1953,” she confesses, “It’s a cellar, damp, clammy. You don’t want to go down there. Down there you can hear the pipes. Sometimes, you have to plug the leaks.” Woven between the violent memories of a Bosnian girl who was gang raped with rifle butts and broken bottles, are the revelations of one woman attending a workshop to reclaim her womanhood (or more specifically, to locate it), a 13-year-old’s guide to surviving life (barely) as a sex-slave in the Congo, and a reclamation of the word ‘cunt’ which had this audience of approximately 300 people chanting the afore-mentioned noun at the top of their lungs. Horrifying truths, squirm-in-your-seat exposés and heart-felt, simple sharing were laid side by side.

Our narrator respectfully asked any women who had experienced violence or oppression to show solidarity of support by standing. The entire cast and a staggering number in the audience rose to their feet

At first, I worried that the women who were guiding us may be (on average) too young to give the necessary weight to their performances as required by their individual monologues; they looked so vulnerable on stage, bathed in light and dwarfed by their “Viva la Vagina” banner. But my fears were quickly put to rest. They took command of their monologues with a passion and decisiveness that was unmistakably defiant.

An eight-year-old girl claims, in one monologue, that her vagina smells of snow-flakes. In another, we are taken on an investigation of the female moan; abundant and various, the options available to a prospective moaner are quite fantastic, and the actress in question delivered a spectacular exploratory rendition of each one to a raucously appreciative audience. When asked what their vagina might wear, answers included silk stockings, emeralds, a red bow, and Armani only. If it could talk, the two words of choice seem to be ‘slow down!’ Interspersed throughout these divulgences were useful and must-know vagina facts; did you know that the clitoris has 8,000 nerve endings, twice the number in the penis? In Texas and Alabama it is illegal to sell vibrators, but legal to sell guns.

Does such a transparent inquisitory into the vagina cheapen it? Does it truly raise awareness? Is it inflammatory and exhibitionist just for the sake of it? In the end, is this all there really is to The Vagina Monologues? Before my visit to the Bristol Old Vic, these were the questions that rattled about in my head. But, whatever the monologues mean to you, whatever your take on them, their impact is undeniable.

At the end of the evening, our narrator respectfully asked any women who had experienced violence or oppression to show solidarity of support by standing. The entire cast and a staggering number in the audience rose to their feet, and brought the reality of The Vagina Monologues crashing into the here and now. Sold out each year with appreciative audiences clamouring for a ticket, I suspect that this particular production will not be stuffed into the studio of The Bristol Old Vic for much longer, and given the chance to flex its muscles on the main stage will hold abundant audiences to rapture for years to come.

During the standing ovation and riotous applause, I caught a glimpse of the tall man in the tweed jacket on his feet, arms raised high above his head, pounding his palms together, and tears in his eyes. Viva la Vagina? – Absolutely and without question.

Photo by uberdork, shared on Flickr under a Creative Commons license

Jessica Gjergji is a freelance writer and arts publicist. She has a knack for killing houseplants, an intense dislike of tofu, and is utterly & happily dependent on tea and chocolate digestive biscuits