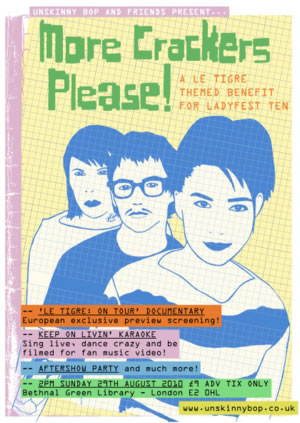 Le Tigre fans, there is a chance to see a preview of their in-progress backstage documentary in London later month. And raise money for Ladyfest Ten at the same time.

On their blog, Le Tigre say:

The film edits together 20 shows from our 2004-2005 world tour along with backstage footage and interviews. The movie highlights our motivations and the many ways we attempted to use humor when confronted with the inherent sexism and homophobia of the rock world.

Unskinny Bop and friends are putting on a Le Tigre-theme night on 29 August – as well as the preview screening, there will zine stalls, and the a chance to be involved in a karaoke contest.

Tickets are not on sale yet, but keep an eye on the Facebook event page, apparently they will be available soon.

And a literary pub quiz and book swap is taking place in Bermondsey, London this Thursday, also to raise funds for Ladyfest Ten. More details on Facebook.