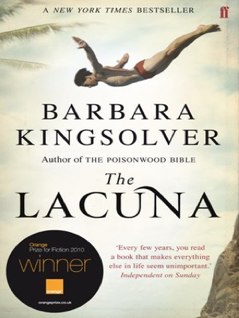 Men at the centre of the story

I’ve been a big fan of US novelist Barbara Kingsolver’s work for many years, so I was already midway through her latest book, The Lacuna when it was announced as the winner of the Orange Prize 2010.

It was a controversial decision, with many people believing Hilary Mantel’s Wolf Hall should have won. To me the surprise was not so much that Kingsolver won, but that she won with this particular novel, which I didn’t think was her strongest work. At least, it wasn’t my favourite. And while I know the Orange Prize isn’t awarded for my personal favourite, it’s still objectively true that The Lacuna is a radical departure from Kingsolver’s previous work in several ways, so it seems likely that it’s that change of direction that is being rewarded.

This quote from a Foyles representative in a Guardian article is quite telling:

“It’s a daunting read, which fans of her hugely popular novel The Poisonwood Bible won’t all take to, but it rewards patient reading. It would be good to see more British writers and more women coming up with fiction as ambitious as this.”

Now anyone reading that would be forgiven for thinking The Poisonwood Bible was light, fluffy chick-lit, whereas in fact it was hugely ambitious and challenging, with the first-person narrative flowing seamlessly from one character’s voice to another, and a wide geographic and historical and political scope. Of course, the story was told entirely from the perspective of women and girls, who are also the main ‘actors’ in the narrative, with men generally appearing in supporting roles on the edge of the story as fathers and lovers. This is true of all Kingsolver’s other novels, and generally the story follows a woman’s ‘inner journey’ of some kind, though that journey is usually intertwined with political events in some way. This, I guess, is enough to justify the back-handed compliment ‘popular’, which is to say, not literary, not sufficiently ambitious.

Now she’s written a male protagonist, with women mostly appearing in the traditional roles of mother/helper/secretary (with the notable exception of Frida Kahlo making a few appearances, though we hear nothing from her point of view) and it’s all about male concerns with none of that emotional girly nonsense. [Hmm, the female characters in the Poisonwood Bible also largely take on supportive/nurturing roles too though? It’s true that their subjectivity is centred, which changes the way this comes across of course…] This, presumably is what is meant by ‘ambitious’ in this context, the thing it would apparently be good to see more women doing.

I wanted to like The Lacuna. I wanted to be not disappointed by the male protagonist, though I’ve loved Kingsolver’s previous work for having the audacity to put women centre-stage and give them real personalities and needs and desires and thoughts and opinions and proper stories of their own that aren’t just all about their love for a man. So it was a hurdle for me to get over, finding that this new work didn’t even pass the book equivalent of the Bechdel Test. I know my feelings in this regard make me perhaps as biased as any literary-prize judge, but I did try to like it. It’s never a good start when you have to try, and it didn’t get much better as I went on. I found I admired, rather than liked it. It goes without saying that Kingsolver is a very accomplished and confident writer, and the structure of the story, the ‘architecture’ as the literary types would say, was flawlessly constructed and it was altogether very cleverly plotted and beautifully written. But there was something lacking.

Despite nice details like the Shakespearean English of the Appalachian secretary, or the tortuously covert ways in which a same-sex relationship had to be conducted in that time and place, I missed was her usual intimate and compassionate portrayal of the characters

A review I read elsewhere suggested it might have been better written as a non-fiction book, and indeed Kingsolver obviously had a good command of the politics and society of the period and locations (post-war US and Mexico), and the historical events of the time. There were nice bits of detail like the Shakespearean English of the Appalachian secretary, or the tortuously covert ways in which a same-sex relationship had to be conducted in that time and place. But what I missed was her usual intimate and compassionate portrayal of the characters. The characters in The Lacuna seemed oddly flat and distant, I never felt I knew them, and so was unable to care about what happened to them, which made the whole story less compelling. I realise a literary novel is not necessarily supposed to be a ‘page-turner’ but I struggle to understand the purpose of literature (or art of any kind) that is not emotionally engaging.

The Lacuna also seemed to lack the lyrical and beautiful descriptions of the natural world, of living, growing things, that form the backdrop to much of her previous work, and showcase her rare skill as a literary novelist with a strong scientific background and the ability to weave science and art together. That passion for biology and nature informs the strong themes of environmental and social justice, and the inherent relationship between the two, that feature in almost all her work. But this too was missing from The Lacuna. I wonder if it was a conscious decision to drop this aspect, as much criticism of Kingsolver has centred around her being ‘preachy’ on these issues. Because that ‘environment’ stuff is all a bit woolly and girly, isn’t it? And as we know, no one wants some woman nagging them when they’re trying do read, do they? Except that ‘nagging’ is usually a misogynistic term for a woman speaking the uncomfortable truth. There’s a valid case that an author’s personal political leanings and beliefs ought not be inserted too heavy-handedly into a work of fiction, but nor should they have to be silenced altogether, leaving only a flat and soulless account of historical events.

Is the Orange Prize biased towards male characters, towards a certain style of writing perceived as ‘masculine’, and particular types of event and concerns considered ‘important’?

I’m happy for Barbara Kingsolver that she has the recognition she deserves as a fine writer. But it makes me worry about the Orange Prize. There’s plenty of controversy over whether a women-only prize such as this should exist at all, and I feel strongly that it most certainly should exist – there’s considerable evidence that writing and other work is judged differently depending on whether it’s thought to be by a man or a woman (and depending on the race and social class connotations of the author’s name, though that’s a whole other discussion in itself). Given that disadvantage to female authors, a women-only competition is not patronising to women, as some suggest, or a form of unfair positive discrimination.

The only fair alternative I can think of is for the work to be judged anonymously, with the judges having no knowledge of the author’s name or identity, which of course presents practical difficulties when it involves already-published and often well-publicised novels!

But I wonder whether there’s another concern, that even within a women-only competition, or an anonymous one, there’s a bias towards male characters, towards a certain style of writing perceived as ‘masculine’, and particular types of event and concerns considered ‘important’ (hardly an objective or non-gendered concept).

Perhaps there’s even more pressure to choose such a novel for the Orange Prize, so as to reinforce that it’s about ‘proper literature’ and not a consolation prize for writers of girly chick-lit who couldn’t compete against men. I don’t know how we could set up a competition to rule out such biases; I suspect it isn’t possible until we see attitudes starting to change in the literary world. I’m not without hope; I imagine Mantel’s much-admired Wolf Hall would have been derided as ‘historical (genre) fiction’ not so long ago, not to mention the corporate crime thriller-style novel by Attica Locke which also made the shortlist. So clearly things can change. But as always, they are changing slowly where women’s equality is concerned.