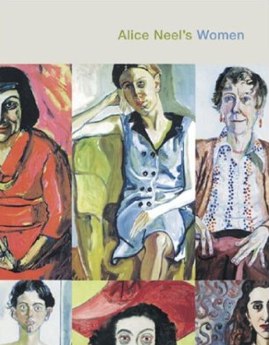 A family portrait, without sentimentality

In an exhibition at the Whitechapel Gallery in London, Alice Neel demolishes cosy notions of family life. She strips the family portrait of sentimentality, and even suggests that the family might be dangerous.

Her portraits of mothers and babies show women drained of energy, their eyes wide and scared, weary or lifeless. The babies, by contrast, are ferociously energetic. They are grasping, needy, attention sucking.

Neel’s take on the family and its effect on women is explosive. The traditional mother and child portrait becomes a power struggle in which the baby is winning. Pregnancy is celebrated in a full-frontal portrait of a pregnant woman,, but the hands and face of the mother betray her anxiety.

Neel’s family portraits show individuals with conflicting desires – visions of a happy family these are not.

But Neel’s view of motherhood is even-handed. She lays out the burdens and responsibilities of motherhood. But she also shows the mutual need between mother and child.

In ‘Nancy and Olivia’, Nancy looks shell-shocked and drained by the defiant, almost leering baby she holds. But mother and child’s heads are pressed together: with this detail Nell tells us all we need to know about the hungry love that passes between them.

Neel’s paintings of naked women are also celebrations. In ‘Margaret Evans Pregnant’, the subject is depicted as defiant and delightful. Neel skilfully and calmly rescues the naked female portrait from the eroticism of the male gaze: this body is powerful. Margaret’s carefully painted belly is celebrated in luminous strokes of pink, purple and peach. Above her huge belly, the dark aureoles of her nipples blaze. Again, though, there are touches of uncertainty – the hands clenched, the face impassive.

These are seductive paintings that flash with colour. Between their blue outlines, though, her sitters twitch and fizz. Their lashless eyes gaze out, by turns fierce, calm, threatening and telling. Their stories debunk popular myths about the joys of self-sacrificing motherhood. Neel’s take on the modern family is searing but it is also intelligent and heartfelt.

Sarah Blake is an editor and art student. She lives and works in London and the Midlands