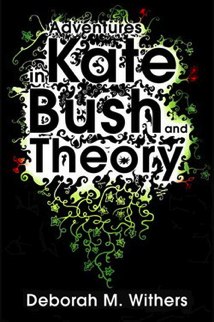 Adventures in Kate Bush and Theory

Deborah Withers’ book is not a biography of Kate Bush. Instead, says Sian Norris, it is a treasure map to the theories underpinning the cultural icon’s work

Having been a huge Kate Bush fan from a young age, and very impressed and excited by Deborah N Withers’ recent book Self Publishing and Empowerment I was really looking forward to reading her cultural theory exploration Adventures in Kate Bush and Theory. And I wasn’t disappointed. This book is a superb exploration into the gender, queer, post-colonial and cultural theory that lies behind the music of singer, dancer and cultural icon Kate Bush. It is a joy from start to finish, taking you on a journey from the 1970s to the present, as Withers comprehensively and wittily uncovers the theoretical intricacies in the work of Kate Bush.

If you are looking for a biography of Kate Bush then this isn’t the book for you. Instead, it is a biography of music, visual art and three decades of the character Withers calls the “Bush Feminine Subject” or the BFS. This is the female subjectivity that inhabits Bush’s world, a subject who sings, plays and acts out the questions, theories and problems in Kate’s work. Withers argues that as listeners we need to separate out the singer Kate Bush and the BFS when exploring the theory of her work.

Withers describes the different characters we may not have associated with Kate Bush, the “the polymorphously perverse Kate, the witchy Kate, the queer Kate”, and to explain this she tells the story of the BFS. She separates the BFS from the person of Kate Bush herself, suggesting that with the death of Kate Bush, the BFS will permanently survive through the music and videos. She explains that the albums of Kate Bush present the journey of the BFS from birth, performance, breakdown, death and rebirth, with rebirth being perhaps a key element in the journey of the BFS, a state that is revisited over her later albums.

Withers approaches the work of Kate as a treasure map to exploring theory, with this book as a code or the tools to unearth the theories.

Firstly, Withers sets up Kate Bush in her status as (feminist? To me anyway!) cultural icon, as an artist who has had huge influence, who in many ways changed the map for women in pop music, who made challenging and hugely listenable music; she was a pioneer in an era when ‘birds didn’t sell’ and certainly didn’t produce their own records. Her visual presentation changed a lot about women’s performance in music videos and her extraordinary voice sounded so fresh, so original, it broke through the masculinist noise of 1970s music like an alarm, like something otherwordly, and refused to conform.

She then quickly moves away from the idea of Bush the woman and returns her concentration on to the BFS who inhabits her work. She suggests that the BFS’ life is seen as progressing through the albums The Kick Inside, Lionheart, Never for Ever, The Dreaming, The Red Shoes and, finally, the Ninth Wave cycle on The Hounds of Love and her latest work, Ariel.

What women experience as we listen to Kate is a recognition of our own, female bodily experience, and an unearthing of our own, unique female history

The structure of the book takes us on a journey through these albums, as well as stopping off at her film The Line, the Cross and the Curve, each cultural moment taking us through a period of the BFS’ life and how the BFS explores an aspect of cultural theory.

So, we have her first album, The Kick Inside, most famed for its explosive hit ‘Wuthering Heights’, which represents the birth of the BFS. Withers discusses how this album has huge amounts of intensely female and bodily imagery, a fluidity which we can associate with birth and women’s bodies. It is an album that has a strong and gorgeous focus on female desire, and Withers uses this as a stepping stone to explore philosophical ideas and discussions about female sexuality, and how the BFS narrates a story of birth, sexuality and desire. She explores what we can take from the wildness of Bush’s voice in this first album, her witchiness, her intense, animalistic, emotive singing that challenges and astounds. As the BFS unlocks the power of the female body, its desires and strength, Withers uses 1970s feminist theory that places the female body as a “site of difference, power and multiplicity to develop these ideas”.

This chapter was a real joy to me. Not only do I love Kate Bush, and The Kick Inside, but I am fascinated by theories that explore the inherent power of the female body, its ability to create, its ability to feel such intense desire – and its silencing in popular culture by the majority masculinist culture. The idea that one of my own cultural heroines is standing up and claiming the power of the female body in a male-dominated musical context, that the songs I have hummed along to since I was a teenager (I came to Bush fairly late!) had a far deeper resonance to my own experience that I had realised, I was punching the air with joy and agreement. This, I think, is what Withers is arguing, the power of the BFS is that she is universal, she speaks to all women and all female experience. It goes beyond the matter of whether you even like Kate’s voice or not (how could you not!!) and suggests that what women experience as we listen to Kate is a recognition of our own, female bodily experience, and an unearthing of our own, unique female history.

The Bush Feminine Subject is taking control of her own home, reordering its boundaries and making the space her own again

And so, Withers says, in The Kick Inside, the BFS is born and ready to embrace her body, its fluidity and her desire.

I won’t go into so much detail over the next chapters so as not to spoil the adventure for future readers, but will take you quickly through the achievements and questions of the book.

We move next to her second studio album, Lionheart, which Withers uses to explore the BFS’ queer life. An album and video set obsessed with performance, drag and fluidity of representation, it explores transgender identities and the possibilities of sexual representation. Yet is is also problematic in its upholding of colonialist and nationalist ideas of the meaning of Englishness against the exotic ‘Other’, as demonstrated in theories on Orientalism.

Withers considers Never for Ever (perhaps most famous for the track ‘Babooshka’) as an interim stage for the BFS before her breakdown in the masterpiece The Dreaming. Withers discusses this album in the context of a traumatic breakdown for the BFS, as she discovers the horrors of oppression, destruction and violence caused by colonialism. The Dreaming is a violent and difficult album to listen to, from the intensity of ‘Sat in your Lap’, the heartbreaking poignancy of ‘Suspended in Gaffa’ (my favourite Bush song of all time!), the jungle drumming and surrealist imagery of ‘The Dreaming’, before closing with what Withers calls “a very angry woman removing a male presence from her home” in ‘Get Out of My House’.

In the song ‘The Dreaming’, Withers argues that the BFS is struggling to confront the post-colonial legacy, suggesting that the track comments on the violence done towards the Aboriginal people of Australia.

It is a definite move away from the exoticising of the foreign that is apparent in Lionheart, and instead we see part of the BFS’ breakdown as becoming about the falling apart of her previous upholding of nationalist stereotypes and unearthing and uncovering the horrors of colonialism. Withers argues that she succeeds in giving the Aboriginal peoples a voice in the song through the “non-representational use of sound”, via art and the didgeridoo. By including their voices in her song, she refuses to exoticise the Aboriginal people as an other.

Withers moves on to explore the violence of ‘Get out of My House’ as an expression of the body in pain, and relates it to the philosophical connection espoused by 1970s feminists of the woman’s body and the house, for example French writer Hélène Cixous used the house as a metaphor to evoke female experience, sexuality and expression. Withers experiences the song as the BFS taking control of her own home, reordering its boundaries and making the space her own again, banishing the man from its walls. Again, this expression of the song was a revelation to me and one that overjoyed me, the sense that the song I loved was expressing the deep and solid need of women to take control of their space, of their bodies, to take it out of male control and own them again. Withers sees the BFS as reclaiming a whole sense of female culture, as a method to recover our lost culture and history and banish the masculinist gloss that has been placed on it.

The Red Shoes album is described by Withers as the death of the BFS, before we explore her re-birth in The Ninth Wave cycle, a moment in music that re-connects the BFS with her witchy history and the earth, and her latest album, Ariel. But I’ll let you go on that adventure yourselves.

This really is an incredible book, inspirational, moving and a playful adventure through the life of the BFS. Withers uses Bush’s music and the character of the BFS to explore the natures of femininity and the construction of the feminine, tackling complex theories in an eminently readable and user-friendly manner. Even if you don’t like Kate Bush’s music it is still worth a read, as it tells us something about female culture that I think we could all do with being reminded of sometimes.

You can buy Adventures in Kate Bush and Theory from Hammer On or at The F-Word’s bookshop.