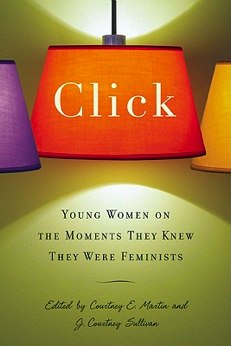 This is the premise of the Click: When We Knew We Were Feminists anthology published by Seal Press, and edited by Courtney E. Martin and J. Courtney Sullivan. They have collected a wide range of inspiring, moving, funny and political memories from US feminists.

The women and men featured vary in age, background and political sympathies. They are mothers, daughters, partners and singletons, working in a range of careers, retired or even still at college. But they all have a click story to tell.

One thing that strikes you as you read the collection is the intensity of the memories. Some are instantaneous, some are a long build-up of confused anger and uneasiness that explodes in to a click moment. But all of them are defining for the teller.

Some click moments inevitably come from traumatic experiences. One of the most moving stories in the collection comes from Marni Grossman, who writes: “Sometimes it feels as though feminism was my consolation prize for surviving an eating disorder.”

Her honest and brutal portrayal of how she survived, and how feminism has come to her, is both sad and uplifting. Uplifting I think, because it reminds you of how women suffer, but how women also triumph. We survive.

It reminds me of how so many women I know arrived at feminism because of their own traumatic experiences, or the traumatic experiences of female friends and relations. When I went to see Germaine Greer speak recently, she said many young women who were already feminists had become so because they had been psychologically damaged in some way.

And although I disagreed with her language and in part with this assessment (of course young women come to feminism for a whole variety of reasons, as Click shows) it does strike me how often our own click moments occur as a result of understanding the damage patriarchal structures wreak on us and our sisters.

A lot of the Click moments are inspired by feminist mothers and fathers who raise sons and daughters to see equality as a natural way of life. Who encourage their children to object to patriarchal structures that seek to oppress them, and live as full citizens of the world. You want to cheer and shout hooray for those parents who have refused to let their children down, who have told them to stand up and be counted.

Stories that break down gender stereotypes, the click moments that say men and women can and do do the same thing. The young man, Jordan Berg Powers, who loves cross stitch and football. He was inspired by his mother who said to him, “I just had stuff I wanted to do, and I didn’t believe anyone could stand in my way.” He describes the bullying from his peers, who stole his MC Lyte record because they thought it was “pussy music”.

His tale shows how hard it can be for men to step out and say they believe in equality, they believe that women should be treated with respect. It puts men at risk, to question the current rules of gender relations, just as it harms women. But his story also tells us how it is possible to overcome these prejudices, and why it is important that we do so.

Another stereotype-bashing moment is sketched out in ‘Killing in the name of’ by Elizabeth Chiles Shelburne. She learnt to hunt as a child, with her father, to show her brothers that girls could do it too. However, the experience teaches her that:

“In my pig-headed determination to show the boys that girls can do anything they can, I hadn’t thought about whether it was something I wanted to do… The point I had proved was that I allowed myself to be defined by what the boys said I couldn’t do, rather than by what I wanted to do.”

Next year, when she goes on a hunting trip, she doesn’t make the same mistake again.

It is powerful, and exciting, to share these moments with one another

Women with physical and mental disabilities tell their stories, saying how their feminism allowed them to fight back against negative stereotypes, empowering them and their choices. In one tale, ‘Growing up female with ADHD’, Li Sydney Cornfield describes her condition, questions the assumptions made about it and, personally, gave me a completely new perspective on an issue I had only really learnt about through sensationalist, tabloid headlines.

Reading the book, I learnt about how women from a whole range of cultures and backgrounds discovered feminism, from privileged young women to women ‘hustling’ in the Bronx, Indian women, Jewish women, African American women, young women, older women, one man, disabled women, all sharing their stories and expressing their beliefs about feminism. I learnt how Jessica Valenti was an obnoxious teenage feminist. I discovered how being royally annoyed by Katie Roiphe spurred Rebecca Traister to embrace feminism. I heard the story of how Miriam Zola Perez came out, and how her passion for engineering inspired Janet Tsai to embrace feminism.

All in all, this book is an inspiring journey through the lives of women who identify as feminists. It is powerful, and exciting, to share these moments with one another. It is, dare I say it, an empowering read. I have only briefly touched on the many stories, but they are all equally fascinating and involving.

However, all the women and men in the book are, of course, from the US. This is because it’s a US book, so there’s no reason why it shouldn’t be. But now, I want to write the British Click. I am planning on collating my own anthology, speaking to all the fascinating women and men in the UK currently involved in feminist activism.

I’ve put it on paper now so you have to hold me to it! I will try and find a publisher, but will otherwise be self publishing this anthology. If you would like to contribute to it, with your own click stories, then please get in touch with me via The F-Word.

Because the UK deserves this book too. We all have our stories to tell. Let’s share them with the world.