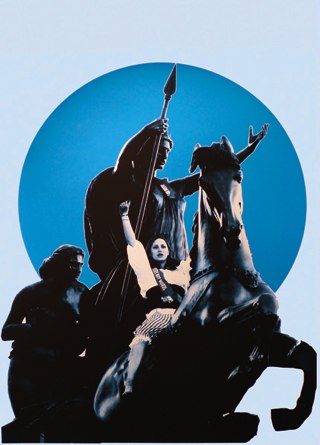 New feature: Out with the old warrior queens, in with the new?

Boudicca’s warrior-queen appeal to activists is enduring. But, argues Hanna Thomas, is it time to create some new myths?

I came across this Cordelia Cembrowicz print earlier in the year and I am not exaggerating when I say that I almost burst with excitement. As a former classics student, and current environmentalist and feminist activist, it was like all my worlds collided and then imploded to create this beautiful work.

Cembrowicz is a member of Climate Rush, a women-led protest group that urges the government to take strong action on climate change through peaceful civil disobedience, inspired by the actions of the suffragettes 100 years ago. They organised a number of actions last year that commemorated dates key to the suffragette movement, including a ‘rush’ on Parliament and a picnic at Heathrow.

The print shows the artist herself at Climate Rush’s Pedal Power protest last summer, sitting astride the Victorian statue of Boudicca (formerly known as Boadicea) and her daughters that sits upon Westminster Bridge. Boudicca, that great warrior queen who almost succeeded in expelling the Romans from Britain, is shown towering above Cordelia, overseeing her protest and protecting her with a generally amazing warrior-queeny vibe.

It feels heartening to look upon it, and think that we and our environmental movement could be descended from such a strong female figure as Boudicca, inheriting her lust for rebellion and the ability to drive social change forward. The suffragettes must have felt the same – they also used this statue of Boudicca to draw a parallel between the strong, ancient military leader and their own cause. The first great women’s suffrage procession departed from the statue on 19 May, 1906; it was drawn on leaflets where Boudicca’s spear was transformed into a banner reading “Votes for Women!”. There are stories of suffragettes turning up to protests dressed as famous female historical figures, such as Boudicca and Joan of Arc. It was incredibly important to their militant movement, to remind their peers that women were not inherently meek.