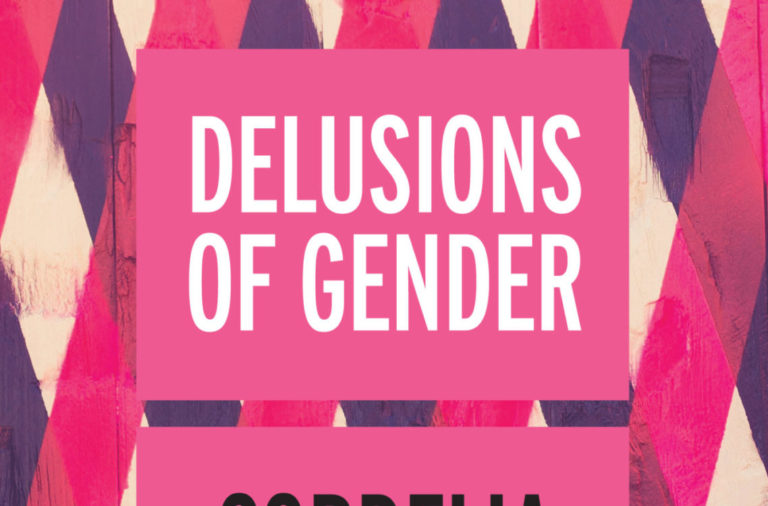 Blue is for boys? In listening to these anecdotes, one conclusion that you might draw is that these differences must be due to innate biological differences between the sexes. After all – the children in discussion grew up in the same household with access to the same toys – what else could be the cause?

Academic psychologist and writer Cordelia Fine warns us against jumping too quickly to this conclusion. In fact, as she points out in her latest book, Delusions of Gender: The real science behind sex differences, history tells us that conclusions such as these in the realm of gender difference are often embarrassingly disproved some years later.

For several hundred years scientists have been trying to explain women’s supposed intellectual inferiority. The theories are getting steadily more sophisticated – early notions regarding the greater elongation of our snouts or the delicacy of our brain-fibres have been discarded and scientists have now moved on to neuroscience. So are we getting closer to an answer? In her book, Fine looks at many of the current theories regarding the differences between the sexes (foetal testosterone, male lateralisation of the brain, the size of the corpus callosu) and shows that we are far from having an answer. She notes:

Claims of ‘essential differences’ between the two sexes simply reflect – and give scientific authority to – what I suspect is really a majority opinion.

As someone who has never really felt comfortable with the majority opinion that Fine mentions, this book is a revelation.

The first section tackles the commonly held preconception that the brain is a static thing, essentially hard-wired from birth with an innate set of abilities and preferences.

Instead, as Fine shows with numerous examples of cognitive psychology studies, the brain is continually learning, adapting and responding to outside influences. This may seem obvious until you realise that these outside influences can be extremely subtle and yet pervasive. Sexist advertisements emphasising negative gender stereotypes have been shown, for example, to influence women’s career preferences, their choice of maths or verbal questions in a test and their interest in leadership.

Other similar studies (she looks at mathematical ability, spacial abilities, map reading, empathising, career choices and house work) overwhelmingly show that the so-called innate differences we associate with men or women are heavily influenced by societal norms. The environment influences our decisions, which become reality, which reinforces the stereotype, which influences our decisions. It’s the Catch-22 of gender equality.

Fine then goes on to a delightful section she calls “neurosexism” in which she gleefully takes apart the pseudo-science and methodological flaws in some of the recent popular claims of gender difference, and exposes them as gender myths dressed up with neuroscience.

Every time I shout out ‘Girls!’ to call the children in for tea I am needlessly reminding them of their gender

Louann Brizendine’s New York Times bestseller The Female Brain comes under fire, as do other writers and academics such as Cambridge University psychologist Simon Baron-Cohen, “author, business consultant and social philosopher” Michael Gurian, John Gray (of Men are from Mars, Women are from Venus fame), and Leonard Sax of the National Association for Single Sex Public Education (NASSPE) in the US.

Yes, both Michael Gurian and Leonard Sax are influential in advising how boys and girls should be taught (differently) at school, but, as Fine shows, much of the so-called science behind their teaching practices is flawed. Concerned? I am.

It seems that while many people may be suspicious of a simple statement of innate sex differences, the same statement accompanied by some plausible neuroscience and a few brain scan images will have a very different effect. The fact that these suspect conclusions could be used to shape education policy is extremely worrying.

The truth is that neuroscience is still in its infancy in terms of our understanding of how the mind really works. We know that there are sex differences in the brain, but relating these differences to complex psychological functions seems to involve a serious amount of interpretation or guess-work. It is really not surprising, then, that many of the interpretations rely on widespread societal beliefs about gender. It takes scientists with an absolute commitment to scientific method to be able to set up appropriate control conditions and draw appropriate conclusions, without falling back on beliefs to explain what they see.

The third section ‘Recycling Gender’ struck a particular chord with me, as it deals with the way in which society’s sexist assumptions about gender affect children. It is eye-opening to realise just how much importance is placed on gender even during pregnancy.

The first question we often ask someone who is pregnant is whether they know the sex, we buy colour-coded clothes, bedding and shoes, we use different language to refer to the different sexes, we buy them different toys, we probably take them on different kinds of outings and we often encourage playing with children of the same sex.

It is little wonder that children themselves pick up on this as a critical part of society, of growing up and of how to behave from a very early age. It has dawned on me that as a mother of two children I am entirely guilty of this. Every time I shout out “Girls!” to call the children in for tea I am needlessly reminding them of their gender. This gender conditioning is all around us, and yet is considered so normal that we mostly don’t even notice it.

Last week, for example, I overheard my friend tell her son, who was engaged in some cavorting around while waiting for school to open, not to be rough with the girls. In this one statement, she had in effect told him that it was okay for boys to be rough as long as it wasn’t with the girls, and reinforced the stereotype that girls are not rough! Now, I don’t know the science behind innate ‘roughness’, but at least having read Delusions of Gender I can comprehend an alternative possibility to the hard-wiring argument – that these children are so fine-tuned to gender that their interests and even to some extent their abilities reflect society’s and parents’ expectations.

It is worth noting that the stereotypes that Fine tackles are those most commonly associated with white, middle-class, heterosexual men and women, and that the research has a heavy US and UK bias.

She also does not really address or attempt to address trans or intersex people, although some of the research into the impacts of foetal testosterone on the brain looks at children born with CAH (congenital adrenal hyperplasia) in which the foetus is exposed to unusually high levels of testosterone.

Although this is an omission, at least her focus on exposing and de-bunking stereotypes is hopefully a helpful exercise to anyone who feels they shouldn’t be expected to conform to society’s unfair expectations.

Delusions of Gender was not only incredibly thought-provoking, but also thoroughly enjoyable. Fine has a clear and amusing style that enables her to explain how seriously complicated the brain is without boring the reader (or at least, not me). For feminists I think it will confirm much of what we already know about the harm that gender stereotypes in the media and advertising can cause, or about why there are still so few women in maths and science, or in leadership roles. But there is also a positive message – that the wiring of gender is not hard but is heavily influenced by society, and that if history is our guide then society is still changing. These two things, if true, create a very slow virtuous circle that will, over time, march us in the direction of equality.

Jessica Smith is a mother of two, sometime blogger, science enthusiast and feminist who believes in critical thinking