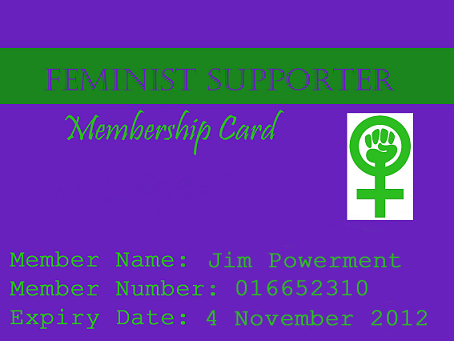 I discovered that I was a pro-feminist kinda guy quite late – probably sometime in my mid-20s.

Through most of my teens, I bought the party line on feminism quite happily: that it was exclusive, that it was redundant and that, even at its best, it had nothing to offer the boy-about-town, beyond an undeserved sense of guilt for atrocities and indignities inflicted by other members of the same phenotype. As a teen, I embraced the notion that feminism was a closed club and that if it didn’t want me, then I didn’t want it.

More than a decade later, I can look over those half-formed impressions with a sense of abstract distaste, but not necessarily regret. They comprised the early steps in a journey that is still ongoing. As I approach 30, I can happily call myself a pro-feminist man. It’s a term that comes with some caveats, many of which can be traced back to earlier roots.

As a younger man, I believed that feminism was a discrete body with a firm membership policy; I believed that it broadly rejected male voices, even those raised in agreement, to the detriment of its intellectual and cultural well-being. I had come to consider feminism primarily as a support network rather than the vibrant, scintillating force of intellectual and social upheaval that it had been in the time of my parents.

Although those beliefs contain elements of both truth and ignorance, my current attitudes spring directly from them. The ignorance is, I accept, rather more conspicuous. The movement that produced Gender Trouble as I approached my early teens surely did not deserve to be considered in any way intellectually or culturally lacking. What was hard for me to accept as a boy was that feminism could marginalise male voices and still do just fine – a peculiar perspective, when male society had been marginalising female voices for generations, but had nevertheless produced great works of art, science and philosophy.