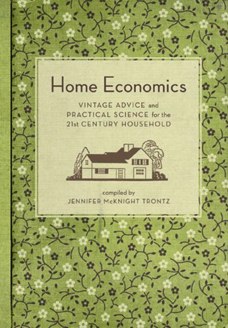 This is a collection of excerpts from the text books used to teach early 20th century schoolgirls home economics. The material has been uncritically repackaged and marketed to 21st century women, says Victoria Dutchman-Smith

Husbands! Now that Christmas is approaching, you’re no doubt wondering what to give to that special person in your life, the one who cooks, cleans, wipes the children’s noses/arses, empties the litter trays, disinfects the potties and so much more (not that you’d notice). It’s a tough one, isn’t it? What could the person who now has everything (washing machine, microwave, hot running water, horseless carriage…) actually want? A new vacuum cleaner ? Too expensive. A dustpan and brush? Already got one. Vanish Mousse? Probably not, since the Cillit Bang Value Pack didn’t go down well last year.

Well, dear men, never fear, for I (and a million publishers and TV execs) have thought of something — a cultural climate that enables your beloved to live as though Mr Muscle never existed, and as though the liberation of middle-class women had remained a mere gleam in Betty Friedan’s eye. Books and magazines which tell your dearest how to cook, clean, wipe, empty and disinfect the hard way, the way it used to be done. What better way to escape the pampered ennui that now pervades the life of a modern housewife? Forget spa days and Sex in the City boxed sets — proper, honest-to-goodness advice on “careful laundering” and “classes of cakes” will save the female soul.

Don’t worry, I’m only joking. Except I’m not. That’s the beauty of retrosexism. All that over-styled, über-cute nostalgia that surrounds us – Mad Men fashion spreads, Dangerous Books for Boys, cupcake machines and frilly washing-up gloves — it just has to be a big joke, doesn’t it? It’s far too exaggerated and overplayed to be real?

Read the rest of the review and comment here