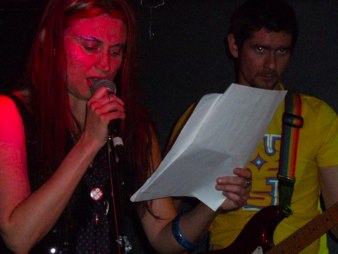 When I saw that Death of the Elephant, Stella Zine and Ste McCabe were playing on 4 November at the Bar House in Chelmsford, I knew I had to somehow get there. It was in my home county of Essex but a bit further out from where I live in Southend-on-Sea.

It was about a half hour drive to the venue, and when we got there they were still sound checking as they were running a bit late. But as we made ourselves comfortable, we could already hear that this was going to be a gig to remember as both Stella Zine and Ste McCabe were seriously rocking out with their guitars, and the sound in the venue was fantastic.

I was a little worried that there weren’t too many people there, as Dee, lead singer of Death of the Elephant organised the gig and I am a massive fan of theirs, so of course I wanted her to do well, as well as it just being too awesome a line-up to miss! But by the time the gig was ready to get started, there was a nice mixed crowd of people, men and women.

First up, was Death of the Elephant. Death of the Elephant are currently based in Chelmsford, but their lead singer Dee is from the US. Their music is very much riot grrrl and punk inspired, so if you are a fan of either of those genres you would love this band. They played a blistering set of short but sweet dirty, sweaty songs with titles like ‘I Love Blue Too’ and ‘Trypticon’. There were a few sound problems but they managed to get through with ease.

Next up was Stella Zine, from Olympia, Washington in the US, where the riot grrrl movement originated. She was part of the scene with her band at the time, Pagan Holiday, supporting the likes of Sleater Kinney.

Before starting her set, she handed out zines that contained her song lyrics, and reading them I could tell she was going to be great. Stella Zine’s music was very much in the vein of Bikini Kill, political heartfelt songs about feminism and segregation: ‘Femi-gandhi’, for example, is a response to the term ‘feminazi’. Other highlights included ‘Her Heart is an Amplifer’ and a spoken word piece about the rights of sex workers with Ste McCabe playing guitar as she spoke so passionately about something she clearly feels strongly about.

Finally, the headliner of the evening was queer punk musician Ste McCabe who had travelled down from Manchester. His music is feminist-friendly electro punk, similar to Le Tigre. His lyrics are brilliant and scathing, rants about the Daily Mail, religion and the treatment of gay people. Songs included ‘Hate Mail’ and ‘Ste McCabe 1, Lloyds TSB Nil’. It’s nice to see men also getting involved in the politics and riot ethos that is normally so tied to women only. He has certainly earned himself a place in the riot revolution, and I know it’s coming as I witnessed it all at this gig. You can buy his latest EP, Harrowing Breakdown, directly from Cherryade Records and hear more of his music on MySpace.

Hayley Foster da Silva lives in not so sunny Southend on sea with her husband and two cats. She is currently trying to start up a feminist group as well as organise a Ladyfest. She is also a radio presenter for the all-female fronted syndicated radio show Pigtails and Army Boots