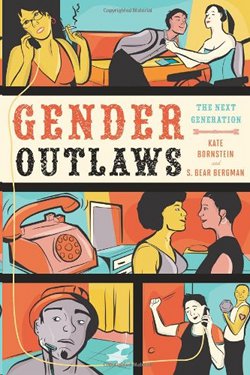 Social pressures impose binary gender on us all, but resistance is possible: Amelia Bayes reviews the follow-on anthology to a key text in queer theory

Gender Outlaw: On Men, Women and the Rest of Us was published in the mid-1990s and soon became a key text in queer theory. Seventeen years on, author Kate Bornstein has produced Gender Outlaws: The Next Generation which showcases how widespread her ideas have become within LGBT communities, as well as academic circles. With co-editor S. Bear Bergman, Bornstein has brought together essays, poetry and comics in a volume that reveals a spectrum of possible gender identities.

The collection’s key theme is that, while social pressures impose binary gender on us all, resistance is possible. There is no one trans identity, and Gender Outlaws’ contributors challenge the presentation of trans narratives as a journey from man to woman or vice versa by embracing identities combining both genders – or neither – or dismissing gender as an irrelevance entirely.

Gender Outlaws emphasises that trans identities are not formed in isolation, that they are formed by constant intersections with race, class and sexuality, amongst other things. Bornstein and Bergman have gathered some truly diverse stories together to illustrate this, and this is the book’s greatest strength, presenting the reader with a constant stream of fresh viewpoints to consider.

Little-heard stories, such as negotiating a pilgrimage to Mecca whilst trans, communicating between genders in a corporate setting, encounters with trans history and experiencing pregnancy as a trans man are all voiced. All this is in addition to more commonly raised debates such as tensions between trans people and the state, surgery, sex and the labels we give ourselves.