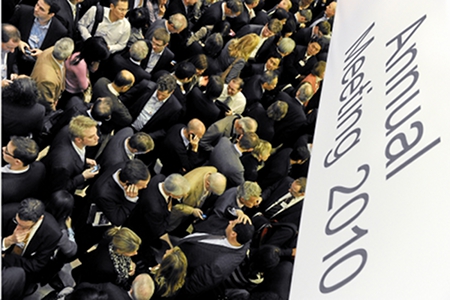 Companies sending senior executives to the World Economic Forum in Davos must send at least one woman for every four men, reports The Guardian:

“The World Economic Forum annual meeting engages the highest levels of leadership from a variety of sectors and participation figures are a reflection of the scarcity of women in this external pool,” said Saadia Zahidi, who heads the gender parity programme at the WEF and came up with the quota plan.

At Davos, the world’s most powerful men (and a few women) broker multimillion-pound deals behind the scenes of the conferences. The forum’s black-tie dinners, cocktail parties and other less formal encounters are the ultimate networking events and those present follow the old “contacts lead to contracts” motto.

But so far, relatively few women have benefited from this high-level schmoozing. Women made up only 9-15% of those present between 2001 and 2005. Progress has been made – last year 17% were women – but Zahidi insists they can do much better.

“Closing gender gaps has been an important concern at the World Economic Forum for the last decade,” she said.

Fewer than 3% of chief executives of the world’s biggest 500 companies are women, and a little over 15% of ministerial and parliamentary positions are occupied by women, the WEF said today.

This move follows years of criticism over the lack of women at Davos. (You might remember we reported last year on the attempt to send a representative from FORWARD to raise the issue of FGM.)

One might easily argue this is playing around the edges of the problem, and a few more female business leaders at the top of the ladder isn’t going to change much. Indeed, the World Social Forum is conceived of as a counterbalance to the WEF, although this year’s event won’t take place simultaneously.

But it is interesting to see the WEF organisers opting for quotas, as the UK is backing away from using them to address the “pale and male” make-up of British boardrooms – with one of the alternatives under consideration “an academy to train and mentor female executives, as well as creating a group of 35 to 40 executives to help women gain the skills needed to hold boardroom posts”.

Photo shared by the World Economic Forum on Flickr, under a Creative Commons license