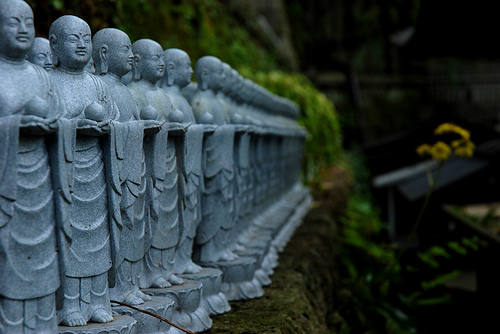 Breaking the silence around miscarriage

A silent miscarriage is when a pregnancy is lost with no symptoms at all and the miscarriage is only diagnosed by the absence of the fetal heart when the mother is given an ultrasound scan. But there is another silence surrounding miscarriage that stems from taboo. In the interest of breaking this silence, this is my story.

Picture from a Japanese temple at Kamakura. Each statue has been placed by a woman who had an abortion or miscarriage, as an offering or prayer

It was just after New Year 2010 that I finally got my much wanted positive pregnancy test. We had been trying for almost a year and were both overjoyed. Unfortunately, the joy was to last only a few weeks. I now know that this is something that many women will go through, and yet it is still rarely spoken about.

At about six weeks, I experienced some bleeding, which led me to an Early Pregnancy Assessment Centre. The midwives there were wonderfully supportive and, after a scan, it looked like everything was OK. Just to be sure, they booked me in for a follow-up scan two weeks later. By this stage the bleeding had stopped, the morning sickness had kicked in and I was sure that things were going well. But the scan showed no heartbeat and less than growth than expected. They wanted to be 100% sure before we took any action, so we arranged for a third scan in a week’s time and I called in sick for the rest of the day.

That week was pretty horrific, physically and emotionally. The morning sickness wasn’t limiting itself to the mornings, I was exhausted and I knew that the baby I was carrying was almost certainly dead. But I went to work as normal, even travelling five hours each way to attend a meeting in London the day before my final scan.

They won’t say that it is because I could potentially be too expensive and disruptive when I have children; that would be illegal. But I am seriously worried that they will be thinking it

The third scan confirmed the worst and I was given the choice of surgery, pills to induce the miscarriage, or waiting to let things happen naturally. As the baby had died two to three weeks earlier, and my body was showing no signs of miscarrying yet, I decided to get things over and done with and opted for the surgery. The surgery was a day procedure, under general anaesthetic, a few days later. From the third scan until a week after the surgery, I called in sick. I was off for just under two weeks.

This felt to me an incredibly short time, both physically and emotionally. However I was very concerned about keeping my job. I haven’t told my work what happened or why I was away. There are two reasons for this: firstly, people just don’t talk about miscarriage and, secondly, and I’m worried that it will put me straight at the top of the redundancy list.

Second things first. Why, in these modern times, should I be worried about losing my job merely because I miscarried? Simply, it will highlight that, not only am I a woman of child-bearing age, but I want to have a child. And that means that I will need to have time off which my male colleagues don’t even request. Several of my male colleagues have had children recently and not one of them took more than two weeks leave. This doesn’t impact the business any more than when someone takes a holiday. I will necessarily need more than two weeks if/when I have a successful pregnancy.

Everyone has a story. Someone they know has been through this. Whether it be themselves, their parents, siblings or friends; no one I have spoken to has been untouched by miscarriage. So why then am I ‘brave’ to talk about it?

If my pregnancy had been successful, I feel that my condition would have been sufficiently visible that I wouldn’t be at significant risk of being made redundant. Not even my company would fire a pregnant woman. But now I don’t have that protection and it is all too easy for the HR department to come up with a reason for me to be the next to go. They won’t say that it is because I could potentially be too expensive and disruptive when I have children; that would be illegal. But I am seriously worried that they will be thinking it. For now, if I don’t mention it, they may just continue to think that I’m too young for kids/don’t want kids/whatever excuse they already have.

Of course, it would be much easier if miscarriages were talked about and I didn’t have to do all this second guessing. But, as I mentioned before, miscarriages are something that people just don’t talk about.

When I’m not in earshot of colleagues, I haven’t been too shy about talking about my miscarriage. I don’t have any family in the country, so I have been quite dependent on my friends (as has my husband, who doesn’t have family here either). When I have brought it up, there have been two standard responses. Firstly, that I am brave to talk about it, and then to tell a story of their own.

Everyone has a story. Someone they know has been through this. Whether it be themselves, their parents, siblings or friends; no one I have spoken to has been untouched by miscarriage. So why then am I ‘brave’ to talk about it?

I acknowledge that it is a very uncomfortable subject. Any death is difficult, but that doesn’t mean that we shy away from mentioning when we lose grandparents, parents or friends. Sure, you might not use the topic as a conversation starter at a dinner party, but there is no shame in saying, “actually, I’m having a bit of a hard time of it, my mother died the other week?” So why should we feel compelled to hide a miscarriage?

Clearly, I don’t think we should. There is nothing I could have done differently (the rarely, if ever, is) and there is nothing to be ashamed about. The support of my friends as been invaluable and I would hope that I can provide that support for others too. But if no one speaks up, too many people (not just women, this is hard for our partners too!) will continue to suffer in silence.

So perhaps we all need to be a little bit brave. That way, in a couple of week’s time when I will inevitably have a bad day, I will remember that I am not alone and I will have the support I need.

Photograph of statues at Kamakura, taken by Flickr user VancityAllie