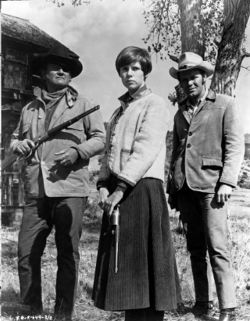 Forget the Dude: this is a woman’s story

True Grit is a testament to the power of remakes. In this archetypal Western, a teenage girl, a fat one-eyed marshall and a vainglorious Texas Ranger embark on a mission to avenge the girl’s murdered father.

Already nominated for 10 Oscars, True Grit is set to dominate at the award shows in 2011. The Coen brothers’ film is a based on the 1968 novel by Charles Portis, which was adapted into a film of the same name in 1969. Directed by Henry Hathaway and starring John Wayne, the 1969 version of True Grit was a box office success, lulling the Vietnam-weary US public into an appreciation of their country’s simpler past. But in the new True Grit, the Coen brothers don’t aim to emulate the original, they aim to surpass.

The trailers mainly flog her male co-stars, but the Coen brothers’ triumph is based on their protagonist, the 14-year-old Mattie Ross (Hailee Steinfeld), out for justice and possibly blood. In the 1969 film, John Wayne’s super-sized on-screen persona eclipsed co-star Kim Darby, who played Mattie. In 2010, however, when it was possible to make a Western without the Duke, the Coen brothers stayed true to the novel’s structure, where Mattie’s story is central and the men play second fiddle.

The audacious power Steinfeld brings to the role, delivering snappy one-liners in rapid-fire and expressing constant disappointment with the blundering of the adult males that surround her, is the key to True Grit’s success. Steinfeld is not the first teenage girl to gain acclaim for kicking booty on screen. Most recently, in Winter’s Bone, Jennifer Lawrence played the 17-year-old hillbilly gangster Ree, receiving similar accolades. And let’s not forget the entire Stieg Larsson trilogy, where Lisbeth Salander’s super hero powers are counterbalanced by a physical description that emphasises pubescence and frailty. One has to wonder why aggressive girls and teenagers are box-office gold, while adult women are rarely seen in such empowered roles.

Mattie travels alone from rural Yale County, Arkansas to the dusty frontier town, Fort Smith, to arrange her father’s burial. The Coen brothers’ cinematography and conception of small town life in the West is commendable. Some of the film’s most pleasurable moments involve Mattie staring down merchants who seek to cheat her as she settles her deceased father’s business. Once this pecuniary dealing is settled, Mattie tackles the most important task: taking the law into her own hands and hiring her own man to capture Tom Chaney, her father’s murderer.

In order to accomplish her sizeable goal, young Mattie boldly strides into all-male spheres. She enters the courthouse, full of heavily whiskered lawyers, and a saloon packed with disreputable drunks. But when the men challenge Mattie for trespassing in the bastions of male power, the Coen brothers keep it simple. The men question Mattie’s age, not her gender.

Mattie is immune from the problems that would face a full-grown woman acting in the same manner, probably for two reasons. First, in the hero versus villain filmmaker formula, the worse off the underdog, the more satisfying it is when the underdog triumphs. Mattie’s spunk as a female child is even more impressive than if she were a young boy. Second, True Grit is a bare-bones Western. Adding sexuality and gender to Mattie’s character is complicated, whether or not it’s realistic to exclude them.

Even Mattie herself regularly invokes her child-status as protection.

“Do you have experience tracking outlaws?” the town sheriff asks her.

For a 14-year-old of whichever gender, Mattie knows a great deal about cotton futures and reciting the law. Mattie is often told she has gumption, as she searches for the right man to go after the murderer. And, although Mattie seeks to hire someone with “true grit” to capture Chaney, it’s crystal clear that the character possessing “true grit” is Mattie herself.

Perched between these two silly men, Mattie is the voice of reason and clarity

Mattie decides to hire the aging Marshall Reuben ‘Rooster’ Cogburn, played by Jeff Bridges, to avenge her father, because of his reputation as a cantankerous, shoot-first, question-later gun hand. She pursues him relentlessly, from the outhouse to his sleeping quarters in a Chinese grocery, harassing him until he agrees to hunt Cheney and let her accompany him on the hunt.

Mattie’s child-status is also frequently highlighted by Cogburn, who wastes no time telling her she’s “no bigger than a corn nubbin” and advising her to go back to her “wet nurse”. When Cogburn demands double the fee Mattie is offering before he’ll agree to pursue Chaney, Mattie replies:

“You are trying to take advantage of me.”

The meat of the movie takes place in ‘civilisation’. When at last Cogburn takes off in pursuit of Chaney, with Texas Ranger LaBoeuf (pronounced “LahBeef”) played by Matt Damon, he purposefully leaves Mattie behind. Mattie, infuriated by Cogburn, whom she refers to as her employee, chases after the two men on a pony.

Once the trio is on the trail together, Mattie’s character evolves from an assertive child into a woman. It’s uncertain whether or not the Coen brothers intended for this to happen. Either way, it adds needed depth to Mattie’s character. The turning point comes when LaBoeuf attempts to force Mattie to turn back to the town by spanking her. When Cogburn intercedes on Mattie’s behalf, Mattie gains power.

From then on, Cogburn and LaBoeuf engage in a nagging rivalry, each vying to come out on top in front of their only witness: Mattie. Cogburn overindulges in booze and drunkenly heckles LaBoeuf. LaBoeuf tells tall tales of Texas, strutting around in showy suede and ostentatious spurs.

In middle age she is as clever and self-sufficient as she was as a 14-year-old girl. She also chooses to remain single

It’s a classic adult love-triangle, minus the sex. Perched between these two silly men, Mattie is the voice of reason and clarity. Her judgement suddenly matters and when Mattie gains this measure of gravitas, her companions see her first as an adult woman, and second as a trail mate.

Meanwhile, the pace of pursuit into the wilderness is moderate rather than rapid. The Coen brothers force the viewer to enjoy the wilderness scenery and the idiomatic 19th century dialogue they’ve so artfully crafted. We meet textbook villains in the form of the Lucky Ned Pepper Gang, which Tom Chaney has taken up with. The relationships between Cogburn, LaBoeuf and Mattie deepen gradually with each scrape. Without giving away the plot, suffice it to say that the climax shootout scene and aftermath are evocative and touching, if lacking the gore level the Coen brothers established in No Country for Old Men.

But perhaps the most praise-worthy aspect of the film is the final evolution of the female lead. The Coen brothers literally take the gutsy, teen, female protagonist to the next level. Narrating the final scenes, we meet Mattie again at age 39. Interestingly, while the Coen brothers relished making buffoons out of the whiskey-loving Cogburn and the vain LaBoeuf, they leave the grown-up Mattie her dignity. Although Mattie establishes early on in the story that her own mother is an ineffectual woman, unable even to spell “cat”, Mattie does not mature into a similarly helpless figure. In middle age she is as clever and self-sufficient as she was as a 14-year-old girl. She also chooses to remain single.

Whether engaging in a study of female film protagonists in 2011 or 1969, by the closing credits Mattie’s character development as she matures from child to woman is portrayed respectably. If only the previews had prioritised Mattie’s role, instead of the gun-toting male clowns that buffer her.