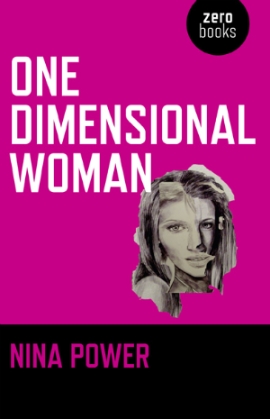 Feminism risks becoming a meaningless word, co-opted by capitalism and right-wing politicians such as Sarah Palin, according to Nina Power’s latest book. Sian Norris has more

This explosive book with its pink and black cover should have pride of place on every woman’s book shelf. Written by renowned academic Nina Power, One Dimensional Woman is a roar of anger against the co-opting of feminism by consumerism and right-wing politics.

The book is only 69 pages long, but in that space we explore how the right has co-opted the language of feminism to defend its wars and anti-choice stance, how the market sells us empowerment in a glass of Chardonnay and a shiny shampoo, how the feminisation of labour puts women’s bodies/goods on display and how looking at the history of pornography can provide us with new narratives with which to talk about the performance of sexuality.

The book opens with an introduction delineating its key themes. Power asks the reader “where have all the interesting women gone?” Based on an assessment of pop culture, you would believe women are a dull, homogenous mass excited by handbags and giggling over vibrators.

Her book predicts Finn McKay’s closing speech at Feminism in London 2010, when she said “feminism has to mean something, or it risks meaning nothing at all”. She argues that feminism has come to mean anything that makes a woman feel good, that shopping for designer shoes and eating chocolate bars has become as feminist an act as marching for your right to choose or volunteering at a rape crisis centre. The idea of ‘it’s good for me’ feminism, that puts the individual’s happiness at its centre, regardless of the effect individual actions have on those around us, is an idea that chimes with a capitalist and consumerist outlook. As Power says in her introduction:

That the height of supposed female emancipation coincides so perfectly with consumerism is a miserable index of a politically desolate time.

Read the rest of the review, and comment, by clicking here