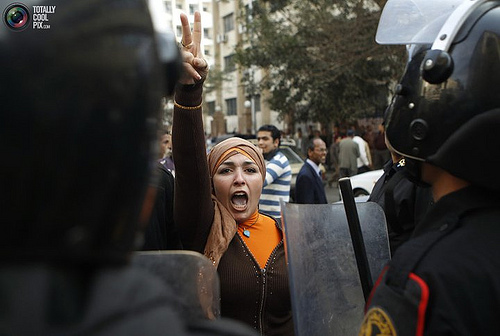 Here comes the new boss, same as the old boss

In November last year, the People’s Assembly (Maglis El-Shaab) – the lower house in the Egyptian Parliament and the principal legislative body – passed a law mandating the creation of 64 new seats in the house that must go to women. As only four women were elected in September 2005, the mandate looked set to increase the proportion of women in the house to 12%. While this still does not compare favourably with, for example, the proportion of women in the UK parliament (21%), it is worth remembering that neither Egypt nor the UK is even close to the world’s most equal parliaments, Rwanda (56%) and Sweden (46%). [Source: The Guardian, 10 May 2010]

However, the Parliament of Egypt was dissolved by the army on 11th February, effectively dismantling both the lower and houses. Since then, the government of Egypt has been a republic under military rule, with legislative power vested in both the government and the People’s Assembly.

Although Egypt is still in a state of transition following the popular uprisings, women from many backgrounds have been committed to fighting for a more equitable society in Egypt for decades; a situation discussed in the Al Jazeera interview which my co-blogger Jolene wrote about in her recent post, Interview on Arab feminism. One point raised during the interview concerned the drafting of the new constitution and the omission of women from the process. As Ruby Hamad, writing in the Sydney Morning Herald, pointed out:

On February 15, Egypt’s military ruling council appointed an Islamist judge, Tarek al-Bishry, to oversee the constitutional panel that will be responsible for drafting the new constitution. The panel, handpicked by Bishry and consisting mostly of fellow judges and politicians, does not feature a single woman.

This is not only galling, but also deeply worrying. Ruby Hamad again:

Without a female voice to influence the constitutional reform, it is unlikely that any reforms will be made that improve the rights of women, particularly given the short time frame. Egypt has unacceptably high levels of sexual harassment and low levels of female employment (in 2007, women’s activity rate was only 23 per cent). While the two may appear unrelated on the surface, the fact is that the status of women in Egypt, as in the rest of the region, is one where they are largely relegated to the private sphere. As long as women are viewed primarily as wives and mothers, then their roles – and their bodies – will be regarded primarily as sexual.

It seems to me that the move towards reforming democratic, political, economic and other issues must include improvements in the status of women – and who better than the women of Egypt themselves to define how their needs should be met in the new democratic system? There is much more to the recent protests than merely removing the old order and, just as women have been pivotal in the uprising, so they are also at the centre of the demands for social change. In my opinion, it’s hard not to view the exclusion of the women of Egypt at such an early and crucial stage in the democratisation process as validating and enabling the re-establishment of some of the greatest injustices embedded in the previous regime; namely the unequal treatment of women. Plus ça change? I hope not.

Image via Al Jazeera English’s ‘Women of the revolution’ photostream on Flickr, used under the Creative Commons Attribution-NoDerivs 2.0 Generic licence.