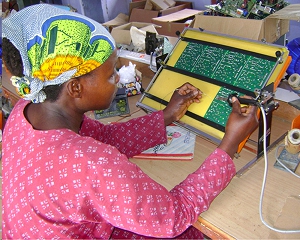 If clean technology is to power the economy, what does it mean that the industry is so male-dominated?

By night, I am the editor of The F-Word. By day, I am a journalist covering finance, tech and policy stories about environment issues – not least, the efforts to transform the economy towards a low-carbon future.

Wherever you go in the world, politicians are eagerly sizing up the jobs that could be created. A good thing!

But, as it happens, the industry is dominated by men. Earlier this year, I spotted a single paragraph on the subject in a report on promoting decent work in the ‘green economy’ by the International Labour Organization:

more studies need to be carried out. The limited information available shows that the

renewable energy industry is a male-dominated industry. In the wind energy sector in the

only 22 per cent of the industry’s workforce in 2008. This is a fairly low proportion

compared to the overall EU labour market average of 44.3 per cent (European Wind

Some are actively addressing the problem – for example, the Barefoot Solar Engineers: I don’t love the name, but do love the initiative to train semi-literate women and men up as installers and fixers of solar power systems – pictured above right is Azouassi Togbe, of the the first women to be trained under the programme in Benin, and she is working on a solar panel that she will install in her home village.

However, this is the exception not the rule, as is highlight again this week, with GreenBeat producing a list of the companies in the US in this sector with no men on their boards.

The majority of the top 10 cleantech companies as ranked this year by the Wall Street Journal have no female board directors. At the recent Cleantech Forum in San Francisco, the seminars were dominated by all-male panels. Lists of the most powerful females in cleantech often elicit a collective “huh?” from readers — they’ve never heard of the women, and they’ve never heard of the companies.

Photo by Barefoot Photographers of Tilonia, shared on Flickr under a Creative Commons license