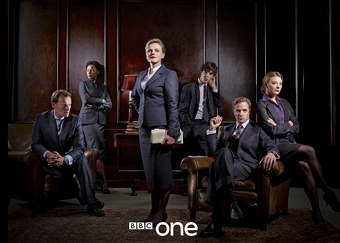 Wigs, lipstick and alcohol: review of the BBC’s Silk

Although it may be a gripping courtroom drama, Abby O’Reilly argues that Silk fails to reflect the true status of women in the legal profession

Be it a voyeuristic insight into the machinations of the criminal justice system or the pursuit of something entertaining to watch on a Tuesday night, audiences have been gripped by the courtroom drama Silk. As a barrister-to-be, however, I am disappointed with the dearth of empowered, britches-holding women represented in the cockpit of the fictional courtroom. Instead, women are mostly relegated to the roles of either victims or vacuous love interests who are more comfortable rolling around in expensive cotton sheets.

Silk focuses on the social and professional life of barrister Martha Costello as she competes with chambers’ colleague Clive Reader to ‘take Silk’ and achieve the much-coveted accolade of QC. Audiences may have hoped for a formidable female legal force, but writer Peter Moffat – a former barrister and prolific screen writer of legal dramas (Kavanagh QC, Criminal Justice) – has sadly portrayed Costello (played by Maxine Peake) in a simplistic, one-dimensional way.

In the opening scene, having achieved a verdict of not guilty in a murder trial, Costello stalks her way back to Shoelane Chambers in Middle Temple where, in bright red lipstick, she scrawls “NG” on the front of her brief. This is not surprising; Moffat’s penchant for cosmetics means that his female leads always have more than a little of the Elle Woods about them. In North Square, his early noughties legal drama set in a Leeds barrister’s chambers, matriarchs Rose Fitzgerald and Wendy De Souza were as notable for the liberal layering of loud lipstick as they were for their dynamic courtroom skills.

They both verbalised the almost preternatural need to flamboyantly paint their mouths during times of high pressure, suggesting that female barristers must look pretty in the courtroom to mitigate pursuing what is often considered to be a masculine profession. Moffat places emphasis on glib paraphernalia and visual signifiers to the extent that Costello becomes the manifestation of contradictions. With her Royal Mail-red lips and Marilyn-like wavy blonde locks, she displays a banal female vulnerability at the same time as being a ruthless contender – there is no disputing the fact that Costello is attempting to achieve a level of professional recognition difficult for women at the Bar.

Silk features only one other established female barrister – Kate Brockman, the token woman of colour. She is presented as resentful of Costello’s success, perhaps because she realises that as women they are unlikely to scale the dizzy heights of the judiciary simultaneously. As Billy Lamb, the chipper senior clerk, remarks, there have only been 245 women silks ever and there are still 12 male QCs to every woman. Gender appears to be a significant barrier to progression at the Bar, with the few women who do make it often floundering at their mid-level career points until retirement. 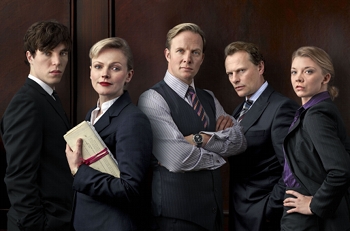 Costello, obsessive about her work and returning home to a dark and empty flat each night, is presented as lonely and personally unsatisfied. She appears to work twice as hard as Reader to compete on an equal level, at times demonstrating extreme emotional investment in a case, rather than exercising the rational thought needed to sustain a long-term legal career. Nevertheless, she demonstrates a remarkable mental quickness and is, in many respects, an admirable practitioner. Although the northerner lacks professional connections, she demonstrates an unrelenting commitment to her clients, working through the night in the first episode to prepare for two last-minute cases. Her only vice appears to be the frequent beer, which Moffat has her crack open and swig to indicate that our Costello – woman though she is – is no walk-over.

Reader, on the other hand, is the textbook advocate – Harrow-educated, sickeningly middle-class and chummy with the judges, he snorts cocaine and treats a pretty pupil barrister as a disposable shag. He appears to be effortlessly successful, maintaining a professional distance by reducing clients to nothing more than temporary problems in his hedonistic lifestyle. Silk’s portrayal of Reader reveals how sexist banter and behaviour is tolerated, championed even. Yet the show pedals the offensive myth that academic and professional women are helpless in the face of powerful men.

Not only are women constantly defined in terms of their sexual desirability, but they are expected to behave in ways that are considered appropriate. Women who approach cases with professional indifference are vilified and seen as unfeeling and masculine. In episode two, Costello criticises the judicial approach to rape, highlighting the fact only 6% of rape cases end in conviction for rape, yet still defends a man she believes is guilty because it promises to be beneficial to her career. She is, in short, a lawyer doing her job. However, producers of the show clearly seem to think that an audience won’t sympathise with this inevitable realism and so imply that Costello may have suffered a sexual attack herself. It shouldn’t be necessary to present Costello as a victim to excuse her ethically questionable behaviour. To do so suggests a naïve and simplistic understanding of what barristers actually do, which is to chase the best results for their clients rather than an objective standard of justice.

The depiction of the rape case is problematic on many levels. The complainant was publicly humiliated and essentially deemed a liar. Although this is a realistic portrayal, it did nothing to critique the laws currently in place – the central message to rape victims was that it is better to remain silent rather than fight for an unattainable result. Currently, between 70% and 90% of rape cases remain unreported, and most women are raped by men they know. Moffat’s representation of this case almost discourages rape victims from speaking out – it neglected to suggest that there is a strong support network in place for victims of sexual attack, or that it is possible to campaign for the law to evolve, ultimately reinforcing the judiciary’s failures.

Although Silk is certainly addictive viewing, Moffat’s frustrating recourse to stereotype has me trying to remind myself that the show was produced for entertainment. Although some may consider it pointless to analyse the fictional representation of women, I believe that writers and producers have a responsibility, since television often moulds our world views. Moffat had an opportunity to challenge preconceptions of female lawyers, but has not produced something refreshingly new or progressive. That said, Silk is not a complete failure; although it confirms the gender bias at the Bar, Costello certainly has potential and displays more than a slither of empowerment – and that, at the very least, is a start.