This year the Bird’s Eye View Film Festival turned its gaze towards horror movies (and puns) with its ‘Bloody Women’ strand: a mini-season of horror films by female directors.

It was a fabulous choice of theme. Sometimes, horror is seen as a genre that excludes and exploits women, but feminist horror fans know better. Those who dig a little deeper know that horror is a genre that might wear boy-drag these days, but beneath the surface its links to women and femininity are clear.

In Victorian times, horror – in the form of the Penny Dreadful – was seen as a ‘women’s genre’ like romance, with its domestic settings and preoccupations with emotions.

That’s just one of the things I learned at the Bloody Women panel debate, where a slew of horror movie insiders debated the genre and the position of women within it. The debate opened with each panel member introducing clips from some of their personal favourite horror films, ranging from grand staples like The Haunting to offbeat gems like Amer.

One fascinating thread of the discussion centred on the horror film idea of ‘the final girl’. This is a staple familiar in films as different as Halloween and Alien, where the final showdown is between a monster and the last surviving human who is always a woman. Is this because of horror’s roots as a genre for women? Is it for male viewers’ titillation? Is it empowering? Why has it become such a common device?

In horror movies, the final girl is also often the film’s protagonist. Horror seems to have a high hit rate for female lead characters when compared to other action genres, as Birds Eye View pointed out. Is this another way we glimpse horror’s Victorian petticoats?

Bloody Women also offered a showing of Katherine Bigalow’s Near Dark, a gorgeous, arty vampire movie directed by everyone’s favourite female winner of the Oscar for best director . Another interesting point of discussion from the panel debate was the annoying regularity with which people point out Bigelow’s relationship with James Cameron and wonder what his influence on her may have been. As the panel’s Lizzie Francke pointed out, a far more interesting question would be to ask what influence she may have had on him.

It is interesting to note that the debate was celebratory of the horror genre and the role of women within it. I found this broadly refreshing, and the arguments about how horror can be degrading and sexist to its female characters are well-trod, but perhaps it would have been nice to have these arguments debated and dealt with, rather than mainly glossed over. Though there was plenty of debate about sexist attitudes, the focus was very much on the failings of the film industry in general. There is a fine difference between the sexism of the film industry and the particular sexisms of the horror genre (though the former no doubt can shoulder the blame for a lot of the latter). I would have liked to have seen the critics of the way horror deals with women given more space in the debate. 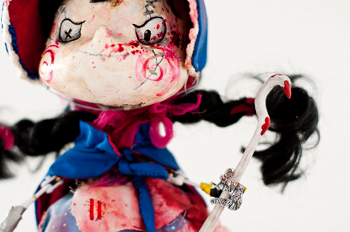 A great treat of the programme was the chocolate box of films offered by the horror shorts evening. Literally all killer, no filler (unless you count the frequent forays into cannibalism). The eclectic bill I particularly enjoyed the disturbing and stylistic Daddy’s Girl by Helen Komini Olsen and the smart and funny I Spit on Eil Roth by Devi Sniveley. The last film featured wonderfully sardonic Bride of Frankenstein who drawled “I have a name you know. It’s Shelly”, which got knowing laughs from the horror buffs in the audience. The hit of the night was Laura Whyte’s stop-frame animation romp, Nursery Crimes, a fractured and nasty gothic fairy story where Bo Peep cracks after losing her sheep one time to many and runs gleefully amok. This story, told with disturbing looking puppets and knitted gore (above right), was nastily cute and genuinely very funny.

So with young, talented female directors on board with the genre, ultra-sussed women proclaiming themselves fans and Frightfest’s Alan Jones (the panel debate’s token man) pointing out that his audience is full of female horror fans who are just as geeky about the genre as guys, could horror be the genre to lead the way in modern filmmaking by making movies that respect and cater for their female fans? Scream, if you want to go faster.