New feature: That’s not my name

Changing name is a hassle. But what is rarely acknowledged is just how much the current systems place a burden on cis women and trans people that is not shared by cis men. Jane Fae reports 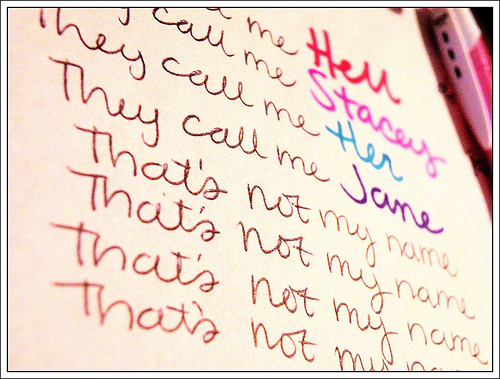 Tried changing your name recently? I have – and it’s a complete and utter pain.

Not just because of all the hoops that some organisations make you jump through. There’s the sheer inconsistency of it all as well. Some want marriage certificates, deed polls, divorce papers. Some don’t.

Some will do it on a phone call. Others won’t. A number of organisations put up ludicrous barriers to change. A few have policies that would make even Kafka whimper.

Tesco ClubCard will change a surname on the phone, but need written proof if you wish to change your first name. npower, initially, would not change my name on a phone call: they needed documentation. However, they happily reverted my partner back to her maiden name with barely a blink. When we put it to them that this was probably discriminatory, treating a trans woman very differently to one living her gender, they gulped and hastily explained their call centre had made a mistake.

“That’s not my name” photograph taken by flickr user i heart him.