17 May: International Day against Homophobia and Transphobia

To mark this year’s International Day against Homophobia and Transphobia, the International Lesbian, Gay, Bisexual, Trans and Intersex Association (ILGA-Europe) has published its Rainbow Europe Map and Index in which it rates each European country’s laws and administrative practices according to 24 categories and ranks them on a scale between 17 (highest score: respect of human rights and full legal equality of LGBT people) and -7 (lowest score: gross violations of human rights and discrimination of LGBT people).

While the publication of this kind of research is broadly to be welcomed, and as eye-catching as the rainbow map is, it may be considered problematic in its conflation of LGB and TS/TG issues. As Justus Eisfeld (co-director GATE – Global Action for Trans* Equality) points out:

In the light of this, the separate indexes for gender identity and sexual orientation may perhaps be of more use.

Note that intersections of race, class, disability, etc, are not mentioned in the report; nor is it recorded whether subjects are binary or non-binary identified. It should also be remembered that some TS/TG people are also LGB, and vice versa. Last but by no means least, it should be noted that – as is so often the case with research of this nature – the situation of intersex people seems to have been entirely ignored. 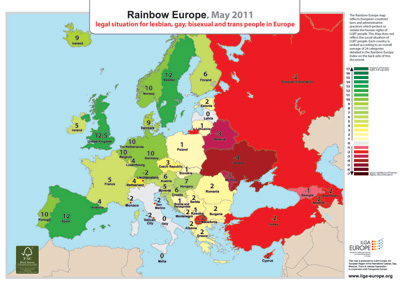 In the first four and a half months of 2011, 55 reported murders of trans people have been registered in 19 countries. While the actual circumstances of the killings often remain obscure, due to a lack of investigations and reports, many of the documented cases involve extreme aggression, including torture and mutilation. 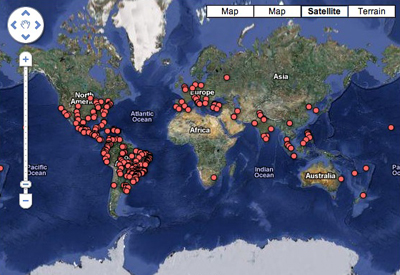 Although it may seem that sexual orientation and gender identity is less of an issue it becomes clear that homophobia and transphobia exists, and may be increasing, in many places. If today’s International Day against Homophobia and Transphobia serves one purpose, it is to raise awareness regarding the ongoing discrimination and violence committed by states, societies and individuals against lesbian, gay, bisexual, trans and queer people on various scales, from homophobic and transphobic legislations and forms of state repression to hate crimes including insults, attacks and murders.

The ILGA Rainbow Europe Map may be downloaded as two PDF files from here (map) and here (index).