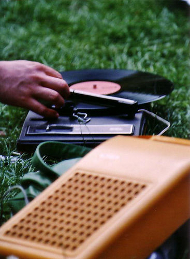 Do you love music? Do you have plenty to say about it? Do you ever find yourself listening to something and thinking it’s just the sort of thing we should be covering at the F-Word? If so, you might be someone we’d like to add to our pool of music reviewers!

Now we’ve expanded the review editing team, each review section will also be growing and Cazz Blase and I will be taking care of the music section.

As Jess said back in February (before the redesign), we want to see a greater diversity in what we are reviewing. Some examples in this section would include more coverage of areas such as jazz, R&B, country and female MCs and women in hip-hop. Getting write-ups on rock and indie bands would be great but we’re also interested in seeing more reviews of dance-related stuff such as the work of DJs and producers. The material included doesn’t necessarily have to have an explicit feminist stance. It just needs to be something that could be of potential interest to feminists.

Along with this, we want more reviews of different types of events and shows, especially those taking place outside London. Whether you choose to write about your local scene or take a more general approach is up to you. You needn’t feel you have to specialise or stick to one particular genre.

This also isn’t just about live music. More reviews of albums would be very welcome too. You might have noticed that reviews have tended to be more focussed on current cultural products as the site has got bigger over the years. We obviously still want to make sure we review contemporary things but would like to stress that we are also potentially interested in visiting a few dusty archives! (My own personal musical enthusiasm is as a record collector and “trainspotter” so this is something I’d personally like to see more of.)

Finally, there isn’t a minimum requirement in terms of how many reviews you do. Obviously, we want to gather together a few regulars but we also expect to receive one-off and occasional pieces so please don’t be put off if you can’t commit beyond that. Another advantage of writing for us is that you get a little more space to explore what you’re reviewing than you generally would in the mainstream music press. Please see our guidelines on writing for the F-Word for more general information on submissions but we would now elaborate on these and advise reviews should be between 800 and 1.500 words.

Edit: Thanks to everyone who has expressed interest so far. Our plan is to start going through the first batch of replies in a week from now. In the meantime, we’re still available at holly.combe[at]thefword.org.uk and cazz.blase[at]thefword.org.uk so please do keep them coming! (Those of you who contacted us through a comment won’t be forgotten but we’ve decided to simplify things by sticking to the e-mailing method from this point.)

Photo by hell*yeah, shared under a Creative Commons Licence.