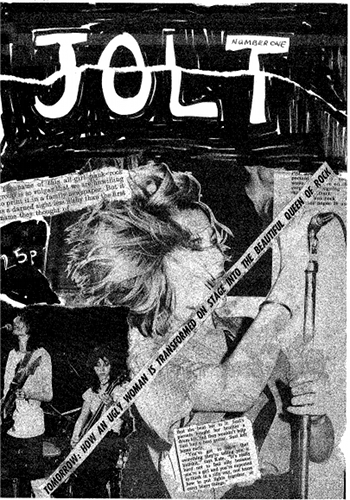 Cazz Blase interviews Lucy Toothpaste, who wrote the fanzine JOLT and played a central role in the punk feminist movement

During the course of researching and writing my recent series of essays on women and punk, one person I was eager to track down was Lucy Whitman who, as Lucy Toothpaste, wrote the punk feminist fanzine JOLT. She had already been immortalised, for me, by her brief – but key – appearance in Jon Savage’s England’s Dreaming book and I wanted to know more. There were female zine writers writing about punk during the late 1970s and I wanted to track them down: starting with Lucy.

I began by asking her when she first discovered punk and what the circumstances were.

“I was influenced by my sister’s boyfriend,” she explains, “who used to go to gigs and read the NME. We went with him to a gig at Walthamstow Town Hall in Easter 1976, and on the bill were the Sex Pistols, Ian Dury and the Blockheads and The Stranglers, so seeing the Sex Pistols was my first introduction to punk. And I immediately found it very intriguing and exciting, so I started to go to other gigs.”

She adds: “At the time I was at university and, by the time I did my fanzine JOLT in 1977, I was in my third year and my interest in punk did threaten to derail my finals! Actually, because I was middle class and I was 22, and I was doing my English degree, I wasn’t sure whether I would count as a bona fide punk. When I decided to do my own fanzine, it was very much ‘Well I wonder will I be accepted as part of what’s going on, or will I be rejected?’ And I was really thrilled when it sold out really quickly and it was definitely seen to be the genuine article, not just as some middle class person muscling in on it.”

Prior to JOLT, in the autumn of 1976, Lucy had formed a performance band, The Neons, with some friends. The band was influenced as much by Dada and Surrealism as by what was going on in the world of punk. “It was six women,” she explains, “and we did four performances, and then our beautiful neon sign flew off the top of the car and smashed, and the band broke up!”

Want to read the rest of the interview? Just click here!