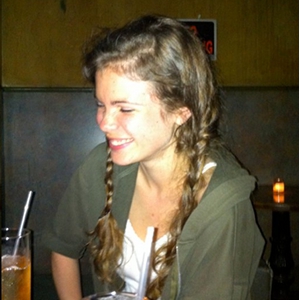 Unclipped: Q&A with Edith Zimmerman, editor of The Hairpin

The Hairpin won me over in January with editor Edith Zimmerman’s photoessay collating together stock images of women laughing alone with salad.

But it’s the daily gems that keep me reading, from Lili Loofbourow’s posts on sex in the 17th century, to finds from the archives, to amusing advice.

Edith talked with us over email about how the site came into being, how she navigates the awkward space of running a ‘women’s blog’, and more…

Can you explain what the site is about, for readers who’re unfamiliar with the awesomeness?

A quick and sloppy summary is that it’s a women’s website, except there are also guys sometimes, and it covers a variety of subjects in a playful way. There’s advice columns, humor pieces, nostalgia-based stuff, food and booze stuff, makeup and beauty stuff, weird stuff, stuff that wouldn’t find a home anywhere else. Stuff stuff stuff.

How did you get to this point – what was your journey in deciding to launch The Hairpin?

The Awl guys came to me (The Awl is our brother blog — we came out of it like a rib), which was awesome. I’d been writing a column for them for a year and a half (and working at New York magazine’s entertainment blog), and they were launching a sister site and they asked me to run it. And I love them, and I love The Awl, so it was pretty much a dream opportunity.

The thing I like about The Hairpin is, it’s a women’s blog, but you’ve managed to get writers who can cover topics like makeup, clothes and jewelry in an interesting and funny way, while also going well beyond that in the scope of your coverage. What do you think about the concept of a being ‘women’s blog’? Is that a hard remit to fill?

The Hairpin doesn’t self-identify as a feminist site, but loads of feminists love you even despite the odd quip at our expense. Do you see the site as feminist at all?

Where does the Hairpin sit in relation to sites like Jezebel, or the feminist blogosphere, on the one hand, and ‘traditional’ women’s magazines and sites?

Hmm. If we were all sitting at a long table, The Hairpin would be at the end of it, on a raised throne.

What is your next step – have you got other projects on the go?

I have no idea! I do a little bit of freelance stuff, but otherwise it’s just The Hairpin, and I’m not sure what the next step is! Sorry, that’s a boring answer. But I have no idea!