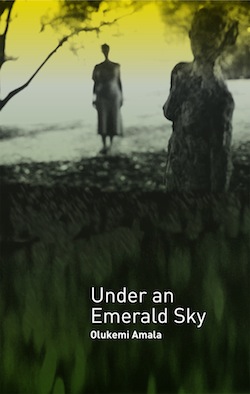 Under an Emerald Sky

Under an Emerald Sky begins with a quote by the writer and philosopher, Umberto Eco:

“I have come to believe that the whole world in an enigma a harmless enigma that is made terrible by our own mad attempt to interpret it as though it had an underlying truth.”

I read this quote at least five times. This novel wasn’t going to be a light read. Dictionary by my side, I was ready for it. Thankfully no dictionary was required.

The story is divided into two parts – childhood and young adulthood. We start at the birth of two babies – Yewande Daramola-Drayton and Mary Johnson. These two girls of Nigerian heritage are born in a suburban town just outside London in 1982. Yewande’s mother is happy with her baby while Mary’s mother is horrified by her newborn. Something is wrong with Mary Johnson at birth but we are not told what till later in the story.

Yewande is born into a family where the women have a special gift of expanded awareness called Olumu. Olumu women inhabit a world where, unlike regular people, perception is limitless.

Amala exposes and challenges many of society’s common beliefs and truths: sexism, racism, religion and homophobia to name but a few

What follows is the unfolding of experiences for both girls at home and within the community. The girls learn their place in the world as female and black. The second part – young adulthood – builds on each girl’s beliefs and attitudes from childhood, leading to an engrossing and powerful finale.

Under an Emerald Sky works on many levels to expose layers of power and oppression. On the surface it is the coming of age story of two young black girls. But around the rich story telling and abundance of humour, Amala exposes and challenges many of society’s common beliefs and truths: sexism, racism, religion and homophobia to name but a few. This novel is not easy reading for those with fixed ideas about life.

In one chapter after another I re-examined my beliefs. I realised again and again how power and oppression define reality. I am studying sociology and philosophy, but this book was better than anything on my reading list – it’s a great novel to discuss at colleges and book clubs alike.

Having been a feminist from the age of 13 and happiest when dressed in sweatshirts and jeans, I identify with Yewande – a strong BMX stunt girl with deadlocks, always dressed in boyish street wear and calling herself a b-girl. She has no desire to be ladylike and wants to be natural 24/7.

Amala’s writing is filled with Nigerian dialect and street talk, and is just fantastic to read. She brings the wonderful characters to life in such a way that the story moves me to tears – of both sadness and delight. The story is utterly gripping, and didn’t leave me disconnected for even a moment.

As a black feminist I loved this novel, and will read it time and time again. I hope other sisters will take a look too.

Lukela Aimmado is a postgraduate student currently living in north east England. Her family are from Ethiopia but have been in the UK for two generations. She loves all feminist writing including work by bell hooks, Angela Davis, Pat Parker, Barbara Burford and Jackie Kay. She admires women who are prepared for action