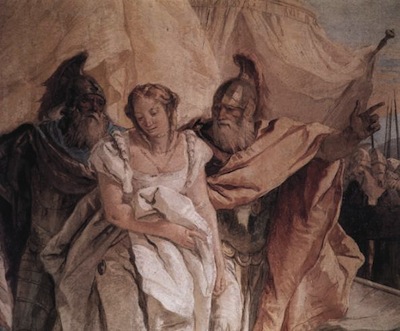 Far from being a feisty embodiment of female empowerment, Briseis in Wolfgang Petersen’s Troy seems more of a victim in a Stockholm syndrome-type relationship. LucindaE traces how the ancient ‘war prize’ story has been transformed into a consensual romantic arrangement to please contemporary audiences

I love a tacky epic, with hackneyed script, cardboard characters, absurd costumes, anomalies and general nonsense. When I finally got round to seeing the 2004 film Troy by Wolfgang Petersen I expected to enjoy it, reputed as it is to have all these features.

Sometimes I did laugh out loud. Still, I didn’t really enjoy it, mainly due to the disingenuously exploitative attitude towards rape and Stockholm syndrome that the filmmakers exhibit in their depiction of the relationship between the characters of Briseis and Achilles.

In the Iliad, Briseis is a princess of Lyrnessus, a neighbouring city of Troy. When the Greeks sack the city, Achilles, the seemingly invincible Greek warrior, kills her husband and brothers and is awarded her as his ‘war prize’ and slave, a visible token of his prestige.

Most critics were dismissive of this attempt to retell the sacking of Troy, but some praised it. Christopher S Morrisey in his article ‘Pomo Homer: A Review of the Troy Movie’ states it has “…the same noble goal as Homer…to appropriate and rewrite old character.”

Ruby Blondell in her article, ‘Third Cheerleader from the Left…’ sees the role of “the feisty Briseis” as empowered, in opposition to that of the “helpless victim Helen”.