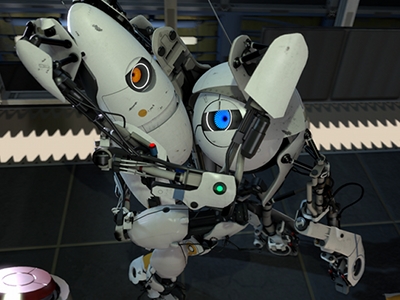 Portal was a refreshing break from the norms of video games – because of the game play, which involves solving physics-twisting puzzles by means of a portal gun; because of the excellent writing; and because it avoids the objectification of women.

When Portal came out in 2007, it was a small project bundled together with some other games in The Orange Box by games company Valve, which grabbed hold of the imagination of the internet and grew into a massive success. Portal 2 is immediately a bigger game: it’s longer and the publicity campaign has seen posters plastered all over London.

Portal 2 (available for PS3, XBox and for PC and Mac via Steam) is still immensely fun to play, and Valve has largely retained the elements which won the first game plaudits from feminist gamers.